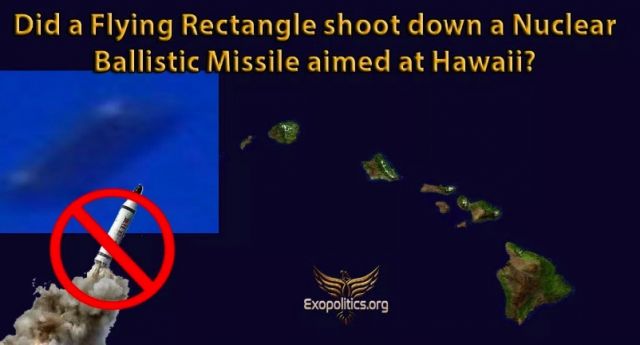 An interesting story by Dr. Michael Salla of Exopolitics.org with some very interesting photos, videos and a story about a man he calls JP who has some very interesting stories to share.  JP has some very impressive photographs of what he claims are ships from the Secret Space Program he has been allowed to photograph.  He also claims to have met aliens and being offered rides in their craft.  I would never trust any alien no matter how "blonde" or "beautiful" they are since Joe Jordan (MUFON) discovered every alien abduction stops in the name of Jesus.  When people tell me there are some "good" aliens then I say "then I guess my prayers won't affect them!"  My philosophy is Pray first, ask questions second!

On February 18, four stunning photographs of a flying triangle shaped craft was taken in Orlando, Florida at around 1:20 am. The photographer, my confidential source JP, was then approached by two men in black who threatened him to remain silent about what he had seen and photographed. The craft appeared with three lights shining, one at each corner, and hovered about 45 feet (13.7 meters) away from him over a secluded field near his home.

The part that interests me most about this story are the excellent photographs of the rectangular and triangular craft and the connection with some whistleblowers of the secret space program who claim the rectangular craft are weapons platforms.   I would not doubt at all we have large flying craft in fact some of them are flying "carriers" similar to the Avengers movies. Was the missile flying toward Hawaii shot down by our secret space force?  I would not doubt it at all.

The Avengers Movies were soft disclosure, we've had "space carriers" for many decades according to whistleblowers.  They don't use big fans though, it's all antigravity, the Germans put submarines in space using antigravity.

This source JP is no doubt being monitored and followed.  The pictures he has gotten of these secret space program craft are some of the best I've seen.  In some cases he says he's been told to look up and see the craft by people in the Air Force that want this information to leak out!

Here's the story from Michael Salla

On July 3, 2019, a photo was released of a flying rectangle shaped UFO near the island of Maui that was taken over a year earlier, and only recently discovered by the photographer. What is remarkable about the photo is that it shows what appears to be a craft very similar to one photographed near MacDill Air Force base in October 2017, which was revealed by my Florida source, JP, to be a weapons platform used by U.S. Air Force Special Operations.

The similarity of the craft seen in the respective photos raises the intriguing possibility that the flying rectangle photographed near Maui may have been involved in the shooting down of a nuclear ballistic missile aimed at Hawaii on January 13, 2018, widely thought to have been a false missile alert.

First, here is the photo of the Maui rectangle along with an insert showing a close-up. 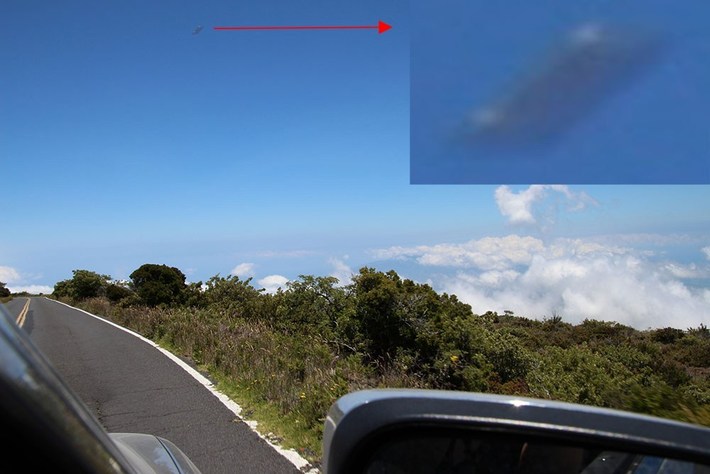 While driving up mount haleakala in maui i took this picture and didnt notice anything until weeks later when i was going over my vacation photos. the object was not seen live. the object was in only one frame, nothing before or after. unkown altitude but as you can see it was above the cloud line [sic].

The photo was taken on May 24, 2018, but the flying rectangle only discovered and reported by the photographer on July 3, 2019, to MUFON.

Now here is some important background for understanding the deep significance behind the 2018 Maui rectangle UFO sighting in terms of photos previously sent to me by JP.

I have known JP since 2008, and he has regularly given me updates on his multiple contact experiences with human looking extraterrestrials, along with his experiences with covert Air Force operatives who have abducted and interrogated him at classified facilities or in their antigravity spacecraft. My evaluation of him is that he is a reliable and credible source, and I have created a webpage with my articles about the photos he regularly sends me.

In October 2017, JP sent me a series of photos of a rectangle shaped UFO that he witnessed near MacDill Air Force Base, home of US Special Operations Command. He took the photos after being prompted to do so by two mysterious men he believes were covert Air Force operatives.

One set of nine photos taken on October 19, 2017, shows a rectangle shaped UFO flying together with a triangle shaped craft. 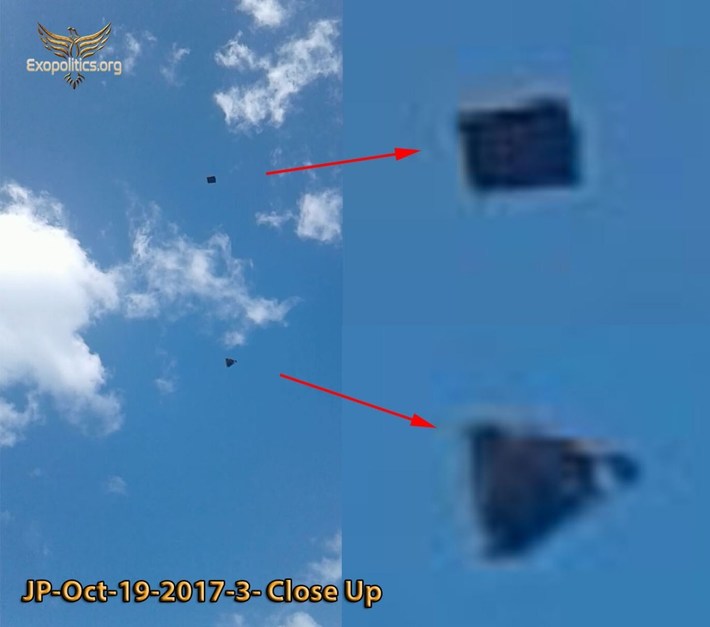 In another set of five photos taken on October 23, 2017, JP witnessed a rectangle UFO flying alone near MacDill. Both incidents involved covert operatives encouraging JP to take the photos. What follows is a short video featuring the October 23 photos and with some close-ups.

In one of the October 2017 incidents, JP recalls having been taken aboard the flying rectangle where he saw personnel wearing the patches of Air Force Special Operations.  He says that during his visit to the flying rectangle, he was in a corridor where he could peer outside and saw many instrument panels. He later speculated that these were part the craft’s weapons control system.

I think similar platforms or UFOs have been reported in the 80s and 90s as they were first building out of these platforms that have modular weapons and personnel delivery systems or configurations. They were built up on that superstructure type frame a long time ago and they been on improved upon since but these are pretty old technologies both the TR 3B and the square platform.

JP recalled his experience aboard the rectangle craft only after he photographed it as a result of being prompted by the two Air Force covert operatives. After being prompted and taking the photos, he then remembered being just taken aboard the craft as his head gradually cleared from a daze after receiving an injection during the abduction.

In my earlier analysis of JP’s photos and his eyewitness testimony, I concluded that the flying rectangle is a weapons platform used by Air Force Special Operations that can be deployed in the upper atmosphere and in Earth orbit. 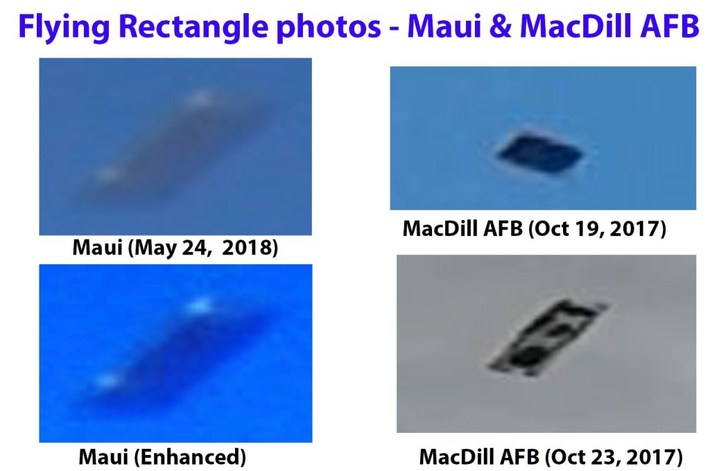 What lends great significance to the Maui photo is that it was taken four months after the alleged “false ballistic missile alert” for Hawaii issued on January 13, 2018.

Remarkably, the military intelligence group QAnon, appeared to have given a warning of an impending false flag attack involving a “Defcon 1” scenario in a series of posts beginning on January 7, 2018, only six days before the Hawaii alert.

What my research revealed was that the ballistic missile alert was ... start World War III by framing North Korea. What stopped the false flag attack was the US Air Force Secret Space Program (SSP), which had recently undergone a dramatic change in attitude, policies, and leadership, the genesis of which I discuss in great detail in my 2019 book.

There were multiple witnesses of something being shot down on the morning of January 13, 2018, near Maui. The US Coast Guard subsequently spent the next week scouring the ocean for debris of what had been shot down as Maui boat captains have confidentially reported to me and others.

These witness reports, along with the testimonies of multiple whistleblowers all support the conclusion that a nuclear ballistic missile was shot down by White Hats within the US military opposed to a Deep State effort to covertly start another world war.

The false flag attack occurred in January 2018, and four months later a flying rectangle is accidentally photographed near the island of Maui. Given the photos and testimony of JP, it appears that a flying rectangle used as a weapons platform by Air Force Special Operations was being secretly deployed near the Hawaiian islands during the critical months after the attack. If so, it may have been also directly involved in neutralizing the January 13 false flag attack on Hawaii.

Synchronistically, a day after the release of the Maui flying rectangle photo, President Donald Trump declared at the July 4 Independence Day celebration that Space Force was soon to be created as the sixth branch of the US military.

Note by Glenn:  Here's some more videos about this rectangular object and other stories.

More photos of antigravity craft near MacDill Air Force Base

Fast moving rectangular craft!   Here's the note from the youtuber:  "upload of an infrared capture of a rectangular ufo craft from 22nd July 2013. Moving very fast so I have slowed down the video by 10 times. It passes behind the bird which is about 100 ft from the camera."