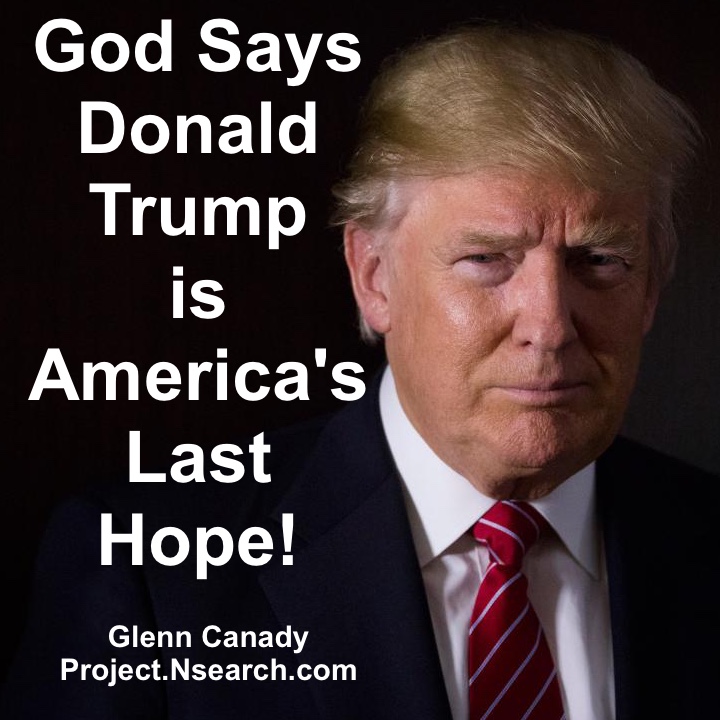 In the video above I call my friend, a prophet but he did not like me doing this!  At the time I made the video, I did not name my friend but I can now.  His name is Jeff Osburn and he is the one reading God's Word Speaks.

All I can tell you is that my friend, Jeff has a direct connection with God and is a humble servant.  He gives ALL the glory to God!  I stand behind everything I said in this video!

This is not a joke.  I will never recant anything I've said on this video no matter how much heat I take for it!  I know the evil ones who deny God exists will attack me and that's fine with me.  I don't need anybody's approval.  Nothing can change the fact I talked directly to God about Donald Trump!

I'm not special in any way.  I'm a dirty sinner like all of you reading this.  I'm only fortunate to occasionally be able talk directly to God through my friend.  When I do, I'm able to ask any question and God will answer it.  Believe me, God is amused at some of the questions I've asked!

I've known Jeff for over 30 years.  He has been a good friend who only became doing God's will about 5 years ago when his whole life changed.  Before this time, he was no different than any of us.  When my friend told me he talked to God the first time, I honestly didn't really believe him!   I didn't realize he was having complete conversations with God and even laughing at some of God's comments!

This all changed when God spoke to me directly through Jeff one day. When it happened, there was no doubt I was now talking to God and not my friend.  God told things about myself only he knew!  One of them was quite embarrassing!  There's no hiding things from God.  There's no excuses, that's for sure!  God has that ultimate DVR with unlimited capacity so he knows everything you do and say!  He's your father who knows everything about you but he loves you with all your faults!

The first few times I talked to God, it was pretty scary for me.  I was scared God would list all my recent sins and tell me the things I was doing wrong.  I soon learned God knows my faults and shortcomings but loves me anyway.  He loves all of us even though we all fall short.

I've had miraculous healing by God through the anointing of Jeff.  All healing comes through a belief in Christ and Jeff gives all the glory to God!  I've felt the anointing!  I've seen Jeff's body get extremely hot with anointing.  I've seen his face get red like it was sunburned and suddenly get very hot even though he was inside all day long.  I've seen Jeff hike in the mountains all day and still not be able to sleep at night because the anointing of God gave him unbelievable energy!  He didn't need food or rest.

One thing I can tell you is God really did inspire the prophets to write his word in the Bible.  It's all true!  God relates things to stories in the Bible all the time!  God told me it's very important you read his word because it brings you closer to him and lets you begin hearing his voice!

When God speaks to me through Jeff, the words and tone of the conversation are completely different.   God uses words my friend would never use!  Two days ago I was talking to Jeff about Donald Trump when God took over.  I took notes on what God told me through his prophet and put it all in this video.   This is the first time I've gone public with any of this information.  Those of you who know me already know I'm a Christian and you know I would never tell you I talked to God unless it was true!  I would be in trouble!

God gave me permission to share this information in this video to let you know he favors Donald Trump even with all his faults.  He even told me some of Donald's faults!  He said Donald has an inflated ego, he can be arrogant at times, and he sometimes exaggerates!  But God loves Donald Trump!  He told me he loves his confidence!  He told me he absolutely believes he can be President of the United States.  God also told me he likes how fiesty Donald can be.  He fights for what he believes in.

I asked if Donald Trump would be President and God told me he gives us all free will so this depends on everybody.  He told me if the people pray for Donald Trump, the attempts at stealing the election would not work!  God says constant prayer are needed for Donald Trump.  Pray for his safety, pray for his wisdom and pray the evil plots are uncovered and stopped!

God told me America will fall economically very fast if Donald Trump is not elected.  God told me Donald Trump is the last chance for America to turn things around!  God said the collapse of America will happen faster than anybody realizes if Donald Trump is not successful.  But God did tell me three things to protect you against bad economic times.  I put this message for everybody  in the "God's Word" section of Project Nsearch.  Please share this information with your friends.  These are three things that will protect you and your family!