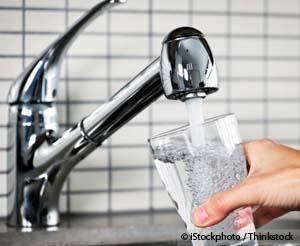 It's no secret that cardiovascular disease is the leading cause of death worldwide. But how many people realize that fluoride—which is still added to many municipal water supplies in the U.S.—is linked to heart disease?

In a new study published in the journal Nuclear Medicine Communicationsi, researchers found that fluoride may be associated with an increased cardiovascular risk as it causes hardening of your arteries.

Reviewing the imaging data and cardiovascular history of patients who received whole-body sodium fluoride PET scans, the researchers found a significant correlation between a history of cardiovascular events and presence of fluoride uptake in coronary arteries.

While there are certainly many factors contributing to the rise in heart disease—poor diet likely being the most important—it certainly doesn't help to add a chemical to water supplies that will be consumed by everyone in the area regardless of health status, from toddlers to seniors, that might contribute to the problem.

The primary issue here is that there's a lack of evidence supporting the use of fluoride, and an awful lot of evidence stacked against the indiscriminate use of it, including these latest findings.

The practice of adding fluoride to tap water began in 1945. With more than 70 percent of U.S. public water supplies currently fluoridated, chances are you're one of the 170 million Americans who drink and bathe in fluoride on a daily basis.ii

Most likely, your dentist—along with countless government and public health officials—has praised and promoted the use of fluoride, both in toothpaste and drinking water, as one of your must-do regimens to promote strong and healthy teeth.

But let's make this point clear right from the start: fluoride is not an essential nutrient needed for your health—dental or otherwise. There is not one single process in your body that requires fluoride.

Fluoride is a Cumulative Poison

Whether this happens or not is highly dependent on the presence of calcium, magnesium, Vitamin C, and selenium in your bloodstream, to which the fluoride will bind so that it no longer is seeking calcium-rich tissues that make up so much of your body. The remainder accumulates in your teeth and bones,iii pineal gland,iv and other tissues, including your blood vessels.

According to the featured study:

The amount deposited into your bones and teeth varies depending on your age. In children, more than 50 percent of an ingested dose of fluoride is deposited in bone, but in adults only about 10 percent is stored there. As the number of research studies into the toxic effects of fluoride has increased, there is now support for a rather long list of potential health problems related to fluoride accumulation in your body.

"Drinking water containing as little as 1.2 ppm fluoride will cause developmental disturbances. We cannot run the risk of producing such serious systemic disturbances. The potentialities for harm outweigh those for good."

How community water fluoridation ended up being so widely implemented, and eventually even became heralded as one of the 10 great public health achievements of the 20th century, is explained in-depth in Christopher Bryson's book The Fluoride Deception.xiv In it, he describes the intertwined interests that existed in the 1940's and 50's between the aluminum industry, the U.S. nuclear weapons program, and the dental industry, which resulted in fluoride being declared not only safe, but beneficial to human health. Once you understand the historical context, it becomes easier to grasp why anyone would ever promote water fluoridation as "a good idea."

Due to the massive amounts of fluoride required to produce bomb-grade uranium and plutonium for nuclear weapons, the Manhattan Project conducted various experiments to determine its toxic effects in 1946.

There were already several instances on record of fluoride being toxic to crops, livestock and people living downwind from the polluters, so the public concern over fluoride emissions needed to be quelled in order to avoid potentially crippling lawsuits.

Within the now declassified files of the Manhattan Project and the Atomic Energy Commission, Christopher Bryson found that the toxicology department at the University of Rochester, under the direction of Harold Hodge, was asked to produce medical information about fluoride that could help defend the government against lawsuits where they were charged with fluoride pollution. Back in 1957, Harold Hodge was the nation's leading, most trusted scientist, and when he declared that fluoride was "absolutely safe" at 1 ppm, everyone believed him.

So, the endorsement of fluoride as a nutrient that will grace you with brilliant pearly whites, rather than the poison it really is, was born from the need to address increasingly debilitating political and industrial problems relating to fluoride pollution. The rest, as they say, is history.

It's important to understand that the "fluoride" added to your drinking water is NOT the natural mineral, nor a pharmaceutical grade fluoride. Instead, the product most commonly used is another chemical fluoride compound—a toxic waste product from phosphate fertilizer plants.

There are three basic compounds that can be used for fluoridating water supplies:xv

The first one of these, sodium fluoride, was the first of the fluoride waste materials to be used for fluoridation, but now is rarely used. It's the most well known, as this is the compound used as pharmaceutical grade in toxicology studies and other research into the potential health dangers of fluoride. The other two, sodium silicofluoride and hydrofluorosilicic acid, are the compounds actually used for water fluoridation, with hydrofluorosilicic acid being the most commonly used additive, according to the CDC.xvi Sodium silicofluoride and hydrofluorosilicic acid are the waste products from the wet scrubbering systems of the fertilizer industry, and are classified as hazardous wastes. Contamination with various impurities such as arsenic is also common in these products.

Hydrofluorosilicic acid is one of the most reactive chemicals known to man. Its toxicity is well known in chemical circles. It will eat through metal and plastic pipes, and corrode stainless steel and other materials. It will dissolve rubber tires and melt concretexvii. This is what is added to your water—all in the name of saving children from cavities! But even the less reactive sodium fluoride is a deadly poison, even in small quantities, and in the form used for fluoridation also contains additional impurities. Other common uses for sodium fluoride include:

The Way Forward: Shifting the Burden of Proof

Still despite all the evidence, getting fluoride out of American water supplies has been exceedingly difficult. And it's no wonder, really, when you factor in the considerable liability the U.S. government could face were they to suddenly admit that water fluoridation was a way to hide toxic pollution, and there are detrimental health effects associated with drinking these pollutants...

Fortunately, there is a way forward.

According to Jeff Green, National Director of Citizens for Safe Drinking Water, a repeated theme in some of the recent cases where communities successfully removed fluoride from their water supply is the shifting of the burden of proof. Rather than citizens taking on the burden of proving that fluoride is harmful and shouldn't be added, a more successful strategy has been to hold those making claims and the elected officials who rely on them, accountable for delivering proof that the specific fluoridation chemical being used fulfills their health and safety claims, and is in compliance with all regulations, laws, and risk assessments already required for safe drinking water.

For example, a couple of years ago, a Tennessee town stopped adding the hydrofluosilicic acid fluoride product they had been using, while still keeping its resolution to fluoridate its water supplies intact (meaning they didn't make a decision on whether it might be harmful). They just haven't been able to find a replacement product that is compliant with existing laws, regulations and safe-water requirements, and they will not add any fluoride product that is not in compliance. To learn more, please see this previous article, which discusses these strategies more in-depth.

In summary it would seem like most rational people would conclude you should avoid using fluoride for its "preventive" benefits. You can easily choose not to take fluoride supplements or buy fluoride-free toothpaste and mouthwash. You can also dramatically reduce your fluoride exposure by opting for organic foods, on which fluoride-based pesticides are not permitted to be used. However, you're still going to be stuck with whatever your community puts in the water, and as discussed, it's very difficult to filter out of your water once it's added. Many do not have the resources or the knowledge to do so.

It's really time to stop the archaic practice of water fluoridation.

Earlier this year I joined forces with Dr. Paul Connett to help put an END to water fluoridation in the U.S and Canada. The Fluoride Action Network has a game plan to do just that. Our fluoride initiative will primarily focus on Canada since 60 percent of Canada is already non-fluoridated. If we can get Calgary and the rest of Canada to stop fluoridating their water, we believe the U.S. will be forced to follow. I urge you to join the anti-fluoride movement in Canada and the United States by contacting the representative for your area below.

If you live in Ontario, Canada, please join the ongoing effort by contacting Diane Sprules at diane.sprules@cogeco.ca.
The point-of-contact for Toronto, Canada is Aliss Terpstra. You may email her at aliss@nutrimom.ca.
The point-of-contact for the Peel region in Ontario, Canada is Rob Brewer. You may email him at FluorideFreePeel@ymail.com. Also see Fluoride Free Peel's Facebook pagei.

New York City, NY: The anti-fluoridation movement has a great champion in New York City councilor Peter Vallone, Jr. who introduced legislation on January 18 "prohibiting the addition of fluoride to the water supply."

A victory there could signal the beginning of the end of fluoridation in the U.S. If you live in the New York area I beg you to participate in this effort as your contribution could have a MAJOR difference. Remember that one person can make a difference.

The point person for this area is Carol Kopf, at the New York Coalition Opposed to Fluoridation (NYSCOF). Email her at NYSCOF@aol.com. Please contact her if you're interested in helping with this effort.

Austin, Texas: Join the effort by contacting Rae Nadler-Olenick at either: info@fluoridefreeaustin.com or fluoride.info@yahoo.com, or by regular mail or telephone: