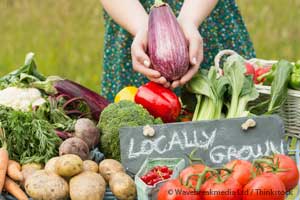 
"The producers of this film are allowing a full and FREE viewing through 4/25. You can purchase the Ingredients DVD at a special discounted price ($11.95) by CLICKING HERE."

The American food system is nearing a state of crisis. Ingredients is a documentary that explores the failings of the industrial food model, and how the local food movement is gaining momentum as a far better alternative. The film presents a refreshing look at food from the standpoint of sustainability, safety, flavor, nutrition, culture, and community.

This documentary takes us across the US from the urban food deserts of Harlem to the biodynamic farms of the Hudson River and Willamette Valleys, and into the kitchens of several celebrated chefs—culinary game-changers who are teaching us all how to eat better.

The current system, focused on cheap convenience foods, is costing Americans dearly. Most Westerners have lost their primal connection to food. Mealtimes used to be savored and shared with others.

Food preparation is now typically viewed as a chore that interferes with other "more important" activities. This detachment from food represents a cultural "disconnect" between humans and the earth, to the detriment of both. It's time for radical changes to our modern food paradigm, which is the subject of this uplifting documentary.

The Exorbitant Cost of 'Cheap Food'

Americans have become dependent on cheap convenience foods that can be "prepared" in five minutes or less—or without taking both hands off the steering wheel. More than 17,000 new processed food products are introduced each year. Bright, catchy packaging conceals foods laden with chemicals, unhealthful fats, and high fructose corn syrup, all of which contribute to today's skyrocketing rates of obesity and illness, especially among our youth.

Americans spend less on food than any other industrialized nation—an average of $151 per week, which amounts to less than seven percent of their income. How can such a low value be placed on something so important for your health and longevity?

The US beef industry has managed to cut its prices in half since 1960. Unfortunately, cheap food contains cheap and toxic ingredients... and you get what you pay for. Food imports have increased four-fold over the past decade, overwhelming the FDA with inspections. Of the 200,000 shipments from China in 2006, less than two percent were sampled for quality and safety.

"Cheap food" isn't cheap when you consider all of the hidden costs associated with it. You make your first payment at the grocery store—just consider this your down payment, because you may be paying for it FIVE more times!

Central to the modern industrial food system are CAFOs (confined animal feeding operations) and monoculture. These massive food operations benefit no one and are devastating to land and animals.

Today, livestock and poultry are typically reared in cages in tightly cramped quarters, with their feed consisting of grains, primarily genetically engineered corn and soy, instead of biologically appropriate grasses.

These animals are literally imprisoned and often tortured by unhealthy, unsanitary, and unconscionably cruel conditions. To prevent the inevitable spread of disease from stress, overcrowding, and poor nutrition, animals are fed antibiotics and other veterinary drugs. CAFOs contribute more greenhouse gases to the atmosphere than the entire global transportation industry.

Meat products from CAFOs raise your risk for getting sick. Think about it—if you buy a pound of standard grocery store ground beef, you're buying a composite of thousands of cows. So, if any of those cows had an E. coli infection, then it's spread throughout an enormous batch of meat widely distributed across the country—or world. This is a problem of scale and density.

By contrast, many smaller scale farms naturally keep parasite levels minimal by having lower livestock density and increased diversity. Animals are much less likely to get sick as they rotate through grazing pastures.

Monoculture (or monocropping) refers to the agricultural practice of growing a single crop year after year on large expanses of land, without crop rotation. Corn, soybeans, wheat, and to some degree rice, are the most common crops grown with monocropping techniques.

Monocropping encourages the use of GE seeds, requires heavy pesticide and herbicide use, and is extremely destructive to the soil, as well as to biological diversity. GE crops and food products pose a threat to your health and ability to resist disease, soil strength, and the global food supply. The earth's soil is now depleting at more than 13 percent the rate it can be replaced due to our chemical-based agriculture system.

Today, 92.5 percent of US acreage is devoted to food animals or their feed, with only 7.5 percent devoted to food that goes directly to feeding human beings. Massive monoculture operations have led to the extinction of 75 percent of the world's crop varieties over the last century.

It is important to note that, just because a farm is "organic" does not mean it isnecessarily environmentally friendly and sustainable. Some larger organic farms still employ monoculture, much like a conventional field. Many do not rotate crops and use insect sprays on a massive scale. Similarly, just because a farm is small and local does not imply that it necessarily uses sustainable agricultural practices. These are important distinctions, making it that much more important for you to get to know your farmers personally.

Farmers Markets and Produce Stands Are Sprouting Up Everywhere

Given the above, you can certainly see how our existing food system is not only unhealthy, but unsustainable. But there IS a better way. We must shift our food sourcing away from multinational corporations and back to smaller local farms, which really amounts to returning to a pre-industrial food system. This does not mean our food system must be "low-tech."

Local farms employing sustainable and high-performance farming techniques, such as biological farming, offer a far superior option, bringing together the best of science and nature. High-tech (but still natural) farming increases soil's health and water-holding capacity, as well as improving the flavor and nutrient value of our food.

According to the Biodynamics Association, biodynamics1 is "a spiritual-ethical-ecological approach to agriculture, food production, and nutrition." Biodynamic farming works in balance with the cycles of nature. For example, crops are planted and harvested in accordance with phases of the moon that actually enhance crop quality and balance within the ecosystem.

The recent surge of farmer's markets and food co-ops is evidence of the growing movement in this overall direction—also known as the "local food movement." People are reestablishing their passion for food and connection with nature. Heirloom vegetables, normally missing from supermarkets, are being reintroduced. Seeds are being saved and cataloged. A new generation of young farmers is being supported, which reinvigorates local economies. According to Grist, the number of farmers' markets has steadily increased over the past 18 years, with the growth curve steepening since about 2008.2 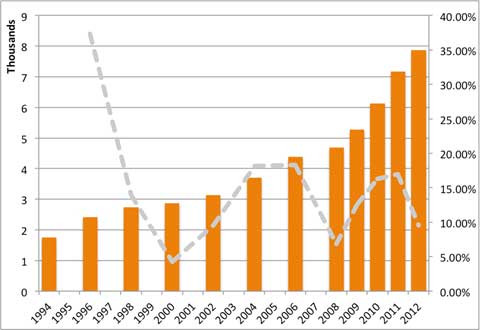 Local Farmers Are Not Without Their Challenges

In order for local farms to grow in number, land must be available near cities. But land is disappearing at an alarming rate—about one million acres per year. Local farmers, and the people fighting on their behalf, find themselves butting up against laws governing urban growth boundaries, which desperately need revision. And these arguments between farmers and land developers will only intensify as our food crisis worsens.

One way you can help is to support CSAs in your area (Community Supported Agriculture programs). CSAs operate through the commitment of individuals who buy annual shares in advance of the growing season in exchange for regularly scheduled deliveries of fresh local produce. These pre-paid shares help cover farmers' operational costs and relieve some of the pressure on these smaller farms to market their produce during the busy growing season.

Slow Food USA3 has a few tips to help you slow down and build your relationship with real food, which I have summarized below. This is not much different from what I have been advocating for years—returning to a whole food diet and eliminating processed foods.

I believe the movement toward local, sustainable food is vitally important, both in terms of human health and the environment, and for the success of future generations. By purchasing your food from smaller local farms practicing sustainable farming, you are pushing the system toward change—and as others join you, a tipping point will eventually be reached that will send big industrial food producers heading for the hills.

Joining the local food movement doesn't mean that every single food you eat must come from within a 100-mile radius—but the majority should. Remember, you vote with your pocketbook each and every day. The following is a partial list of resources to help you locate farms in your area. Please also see my sustainable agriculture resource list.