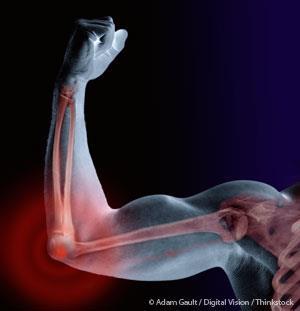 Your bones are constantly being rebuilt in a dynamic process involving the removal of old bone through osteoclasts and regeneration of new, healthy bone by osteoblasts.

Weight-bearing exercise works to build stronger bones by stimulating cells responsible for the synthesis and mineralization of bone (osteoblasts). As you put more tension on your muscles it puts more pressure on your bones, which then respond by continuously creating fresh, new bone.

This is important at all ages, although there are certain periods in your life when exercising for bone strength becomes particularly important and effective, including during your childhood and later as a senior.

Youth have a unique opportunity to impact the future health of their bones by staying active during their childhood. Researchers found that boys and girls who were the most active throughout their lives (starting at age 5) had denser bones and better bone shape than less active participants at the age of 17.1

It should come as no surprise that good bone health in your later years begins in your youth, during your childhood and adolescence, as this is when skeletal growth is at its peak. This time of bone development sets the stage for what's to come.

Peak bone mass during childhood and adolescent years is one of the major factors that can either contribute to, or help prevent, osteoporosis down the road, so it makes sense to pay attention to building strong and healthy bones during the early years.

Unfortunately, the study found that most children and teens are not active enough to take full advantage of these formative bone-building years, especially as they got older.

The key is to get your child interested in physical activity from a young age. Even when activity decreased during the teenage years, children who had been more active in childhood still had better bones.

This doesn't mean you need to drag your child along with you to the gym, of course. Mechanical loading – running and jumping, as opposed to swimming or biking -- is one of the best strategies to help your kids build excellent bone mass early on, and these are the types of activities that occur naturally (and frequently) during free play.

Tips for Getting Your Kids Active

According to the featured study, "bone health benefits of physical activity are not being realized due to low levels of activity for most youth, especially in girls." So what can you do to encourage your kids to stay active?

Unless your child is seriously overweight or obese (in which case he may benefit from seeing a personal trainer who specializes in children), you shouldn't expect him or her to log in 30 minutes on the treadmill or elliptical machine. The trick to getting kids interested in exercise at a young age is to keep it fun, not feeling like a chore.

Encourage your children to engage in activities that are naturally interesting to them, such as playing on the monkey bars, rollerblading, skateboarding, dancing, playing basketball with friends, hopscotch, jumping rope, or even helping you in the garden.

Organized sports are great, but so are spontaneous romps through mud puddles, climbing trees, and making snow angels. Resist the urge to overly structure your child's "exercise time," instead encouraging natural active play.

Toward this end, allow your kids to exercise in bursts throughout the day -- a game of tag here, a bike ride there -- so they don't feel pressured or like they're being "punished." It's also imperative that you act as a role model by staying active yourself. If your kids see you embracing exercise in a positive way, they will naturally follow suit.

Encouraging your children to stay active is truly a life-long gift. As reported in theJournal of Musculoskeletal & Neuronal Interactions:2

"The young skeleton shows greatest plasticity to physical activity-related mechanical loads, but bones are most at risk of failure later in life. The discrepancy raises the question of whether the skeletal benefits of physical activity completed when young persist with aging."

It turns out, they do. After analyzing the bone differences in the throwing and non-throwing arms of major league baseball players at different times in their life, and comparing them to differences in non-baseball players, the researchers found that exercise when you're young leads to stronger bones, with the benefits persisting during aging, even into your 90s.

"Exercise during youth adds extra layers to the outer surface of a bone to essentially make the bone bigger. This gives you more 'bang for the buck,' as the addition of a small amount of new material to the outside of a bone results in a disproportionate increase in bone strength relative to the gain in mass."

If you're a parent, heeding the advice to keep you kids active now will benefit their bones for decades to come. But what about you? What if you're a middle-aged or older adult who didn't exercise much as a kid… is it too late to build up your bones? Absolutely not! Once peak bone mass is achieved, it begins a slow decline, but exercise can help you to maintain healthy bone mass even as you get older. Physical activity during aging can help you to reduce skeletal structural decay5 and much more.

Among the professional baseball players in the aforementioned study, those who continued to throw for another 20 years after their careers ended had less bone loss from the inside of their bones, and were able to maintain more bone strength, than players who stopped throwing as soon as their careers ended.6 A series of studies in the Scandinavian Journal of Medicine & Science in Sports also revealed that older men who stayed active by playing soccer reaped numerous rewards (even if they were previously inactive). For instance:

Resistance training and strength training are among the most popular forms of weight-bearing exercise to build your bones – and they're fine examples, but not the only ones. If you prefer, you can use bodyweight exercises to build your bones, which have the added benefit of being convenient (you can do these exercises virtually anywhere and they require no equipment). One to try is a walking lunge, as it helps build bone density in your hips, even without any additional weights. Running and jumping are also effective. As discussed in the New York Times:10

"Sprinting and hopping are the most obvious and well-studied examples of high-impact exercises. In one recent study, women ages 25 to 50 who leaped like fleas at least 10 times in a row, twice per day for four months, significantly increased the density of their hipbones.11 In another, more elaborate experiment from 2006, women who hopped and also lifted weights improved the density of their spines by about two percent compared to a control group, especially if the weight training targeted both the upper body and the legs.12 Women whose weight training focused only on the legs did not gain as much density in their spines."

Power Plate: Another Phenomenal Form of Exercise to Build Your Bones

Acceleration Training, a.k.a. Whole Body Vibrational Training (WBVT) using a Power Plate, is another safe, natural way to improve bone strength and density, thereby warding off osteoporosis. Best of all, it's gentle enough even for the disabled and elderly, who may not be able to engage in exercises like leaping, hopping, sprinting, or weight lifting. The Power Plate platform vibrates in three planes: vertical, horizontal, and sagittal, meaning front to back. (There is equipment out there that only moves in two planes but the three-plane movement devices seem superior.)

These micro-accelerations force your muscles to accommodate, resulting in dramatic improvement in strength, power, flexibility, balance, tone, and leanness. The technology was actually first developed by Soviet scientists looking for a way to heal cosmonauts from the effects of being in a weightless environment. Research supporting the use of WBVT for the prevention and treatment of brittle bones include, but is not limited to, the following:

Also of note, WBVT can increase your body's natural production of human growth hormone (HGH), which plays a role in bone density development (as well as much more, such as muscle growth, brain function, metabolism, and tissue repair). Studies suggest WBVT may lead to increases in HGH of more than 400 percent,15 with at least one study showing it may increase HGH production by 2,600 percent!16

Ideally, your fitness program should be comprehensive, providing the necessary weight-bearing activities for bone health while also improving your cardiovascular fitness and fat-burning capabilities with high-intensity exercises. For a more complete, in-depth explanation of my Peak Fitness regimen, please review my previous article, "The Major Exercise Mistake I Made for Over 30 Years." Implementing Peak Fitness -- with its array of weight-bearing exercises for bone health and high-intensity exercise for disease prevention, fat loss, and more -- may be one of the best lifestyle changes you could ever make.

Rounding Out Your Plan for Better Bone Health

Exercise is, without a doubt, crucial for optimal bone health, but the following guidelines can also help you maintain, or increase, your bone strength safely and naturally at any age: