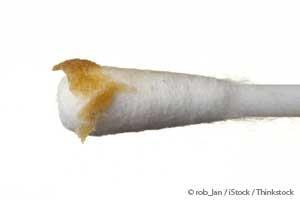 Earwax, known technically as cerumen, is produced by glands in your ear canal. Made up mostly of dead skin cells, earwax also contains other substances, including lysozyme, an antibacterial enzyme, fatty acids, alcohols, cholesterol, and squalene.1

In fact, earwax isn't "wax" at all; it's a mixture of water-soluble secretions. And although you probably don't give your earwax much thought, it actually represents one of your body's most ingenious protective mechanisms. Earwax isn't simply a hygienic nuisance… far from it.

Your ears produce earwax constantly so that, ideally, you'll maintain just the right amount in your ear canals. Unless you have an earwax blockage, which I'll discuss below, it's actually best to leave your earwax alone – don't try to remove it with cotton swabs or other devices.

In fact, if you have too little earwax in your ear canal, your ears may feel dry and itchy. This is because earwax is there for a reason – to protect your ears and provide lubrication. It does this by:

Your Ears Are Self-Cleaning: Keep the Cotton Swabs Out

Excess earwax should move out of your ear canal automatically, as cells there actually migrate naturally. The removal of earwax is also helped along by movements of your jaw (talking, chewing, etc.), and once it reaches your outer ear it will simply fall out or be removed when you shower or bathe. AAO-HNSF states:2

"Unfortunately, many people mistakenly believe that earwax should be routinely removed for personal hygiene. This is not so. In fact, attempting to remove Earwax with cotton-tipped swabs, bobby pins, or other probing devices can result in damage to the ear, including trauma, impaction of the Earwax, or even temporary deafness. These objects only push the wax in deeper, and can block the ear canal entirely."

Your Genes Determine Whether Your Earwax Is Wet or Dry

There are two types of earwax:

A single gene has been identified as the determining factor in which type of earwax you have, and your family background matters. Dry earwax is common in East Asian populations while wet earwax dominates in African and European populations. The same gene variant that leads to dry earwax is also responsible for reduced underarm body odor in Chinese, Japanese, and Korean individuals.3

Interestingly, when measuring the concentration of 12 volatile organic compounds in earwax from East Asian and white men, Caucasian earwax had more odorous compounds, which one day might be used to help detect disease.4

Like certain other bodily secretions, earwax may be an indicator of your exposure to environmental pollutants, although there's not much reason to measure earwax pollutants as opposed to, say, getting a blood test.

To get an idea of how much you could, theoretically, learn from analyzing earwax, consider an analysis of earwax from a blue whale. As BBC News reported, blue whales actually retain their earwax for life "recording life events similar to the way tree rings reveal arid and wet seasons during its lifetime."5

Whale earwax has been described as "a time capsule for stress and toxins,"6 with one analysis showing the whale had been exposed to several organic pollutants, including pesticides and flame-retardant chemicals, as well as mercury, and had higher levels of the stress hormone cortisol released upon reaching the age of sexual maturity.7

Earwax Blockages: When to Remove Earwax

I have treated hundreds of people in my life who had cerumen impactions. Typically, this required flushing the ear with a syringe or using a dental irrigator to soften the cerumen so it could come out.

The wax can effectively eliminate most of the sound coming to that ear making one nearly deaf on one side. It's estimated that more than 12 million people a year suffer from impacted earwax. This accumulation of earwax may cause your ear canal to become blocked, leading to the following symptoms:8

If you do experience a buildup of wax, you can easily remedy the situation at home by using either water, oil, or ear drops to soften the wax to help it migrate out on its own, or you can use ear irrigation to flush the wax out. Acceptable liquids that you can use for this purpose include:

It's worth noting that using plain sterile water, or a sterile saline solution, to soften earwax works just as well as oil or over-the-counter ear drops. However, I normally find that high-pressure irrigation of the ear canal with a syringe is necessary to remove troublesome wax. This should only be done by a professional as if done improperly it can damage your ear drum.

Additionally, you should NOT irrigate your ears if you have diabetes, a perforated eardrum, a tube in your eardrum, or if your immune system is weakened. If you suffer from a more serious impaction or you can't get results at home, you may need to get the earwax removed by a physician who can manually remove the wax using microsuction, an otoscope, and appropriate instruments.

Ear Candling Is Not Recommended

Ear candling involves putting a hollow cone-shaped device or "candle," typically made of linen or cotton soaked in wax or paraffin, in the ear canal, and lighting it on fire. The person undergoing the procedure lies on his or her side. A paper plate or other collection device is placed above the ear, and the candle is inserted through a hole in the plate into the ear canal. The candle is lit, and trimmed as it burns down.

After the candle burns down and is removed from the ear, a cotton swab is used to clean visible wax from the ear, and oil is sometimes applied as a finishing touch. Proponents and practitioners of candling maintain the procedure removes wax and other impurities from the ear. The process by which this purportedly happens is as the smoke moves down the candle into your ear and back out again, a vacuum is created that pulls out wax and other debris from your ear into the hollow candle.

However, research published in the journal Laryngoscope measured this pressure and concluded that no negative pressure was created.9 The same research also revealed that no earwax was removed during candling, and that candle wax was actuallydeposited in some test subjects' ears. Additionally, serious injuries may result from ear candling, including external burns, ear canal obstruction with candle wax, and even a perforated eardrum. Remember, earwax has been designed by nature as a cleaning mechanism for your ears. For most of us, the wax moves through the ear canal and eventually makes it to the outside, taking any dirt and other accumulated matter with it. Typically, only earwax that has reached the opening of your ear should be removed.

Prevention is the best way to treat this problem. Frequent excess buildup of earwax can oftentimes be traced back to an omega-3 deficiency, so the remedy is quite simple: take a high-quality, animal-based omega-3 supplement. Once you've cleared out any excess buildup or impaction, making sure you're getting sufficient amounts of omega-3 will normally prevent a recurrence. If the earwax buildup does return, it's a clue that you may still have a serious omega-3 deficiency.