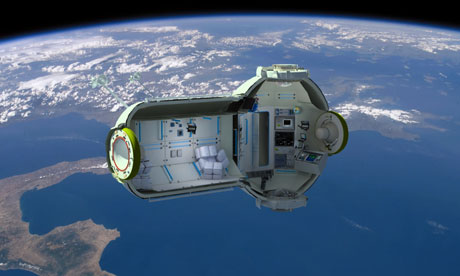 Up to seven space enthusiasts at a time would be housed in the Hotel in the Heavens, which is planned by Russian company Orbital Technologies

Russian engineers have announced the ultimate get-away-from-it-all holiday, revealing plans to put a hotel into orbit 200 miles above Earth by 2016. The four-room Hotel in the Heavens would house up to seven guests who would be able to cavort in zero-gravity while watching as our planet turns.

The out-of-this-world experience will not come cheaply, however. Spacetourists will have to pay £500,000 to travel on a Soyuz rocket to get to the hotel before stumping up a further £100,000 for a five-day stay.

"The hotel will be aimed at wealthy individuals and people working for private companies who want to do research in space," said Sergei Kostenko, chief executive of Orbital Technologies, which will construct the orbiting guest house. "A hotel should be comfortable, and this one will be."

The news that Russia plans to launch a hotel into outer space is the latest example in a series of extreme holidaymaking projects. As the world accumulates more and more billionaires, entrepreneurs are seeking newer and more demanding ways to provide them with the ultimate in hi-tech thrills. Apart from space hotels, which have also been touted recently by US and European aerospace companies, proposals to fly thrill-seekers on rocket flights to the edge of space are now being finalised by Richard Branson's Virgin Galactic as well as by US companies such as Space Adventures, Armadillo Aerospace and XCOR Aerospace.

In addition, billionaires may soon be able to buy their own artificial countries – built in international waters on oil rig-type platforms – where they can indulge in their dictatorial fantasies. Or they could buy high-performance submarines that will allow them to dive and explore the deepest parts of oceans. Being rich has never offered so many opportunities for adventure – and excess.

In the case of the space hotels, hedonism will be limited, however. Orbital Technologies have made it clear that guests will be restricted to consuming iced tea and fruit juices for their liquid intake. Alcohol will be banned. In addition, waste water will be recycled while air will be filtered to remove odour and bacteria and then returned to cabins.

Tourists, accompanied by experienced crew, will also have to dine on food prepared on Earth and reheated in microwave ovens, while showers will be carefully sealed affairs to prevent water escaping as globules that otherwise would float around the hotel's interior.

It is scarcely five-star luxury. On the other hand, there will be many compensations. Views of the Earth from the space hotel's special observation windows should be breathtaking as the craft whizzes round our planet every 90 minutes – providing guests with 16 sunsets and 16 sunrises a day. Visitors will also be able to choose to have their beds vertically or horizontally inclined to their line of flight. Indeed, the prospect of weightlessness offers all sorts of zero-gravity activities that can only be dreamt of on Earth.

By contrast, the pleasures offered for those who go on suborbital flights offered by Virgin Galactic will be over far more quickly. Launched on craft pioneered by aviation designer Burt Rutan, these craft will allow passengers to slip the surly bonds of the gravitational field for only a few minutes before their rocket-powered craft descends back to Earth. On the other hand, the company's plans are far more advanced than those put forward by most other space tourism entrepreneurs. Branson says Virgin Galactic's first flights should begin next year. Tickets will cost a mere $200,000, with celebrities such as Paris Hilton, Tom Hanks and Stephen Hawking signing up for early flights.

If that doesn't appeal, Peter Thiel – who co-founded PayPal and who was one of Facebook's earliest backers – has revealed that he wants to create communities that would be run according to extreme laissez-faireideals. According to Details magazine, he wants to build artificial islands – based on oil-rig designs – that would be a "kind of floating Petri dish for implementing policies that libertarians, stymied by indifference at the voting booths, have been unable to advance: no welfare, looser building codes, no minimum wage and few restrictions on weapons." A billionaire's dream venture, in other words.

And then there is the prospect of taking to the ocean depths in a range of new submersibles that will use ultra-strong materials to withstand the incredible pressures found at the deepest parts of the oceans. Again these are aimed for sale to the planet's richest inhabitants.

"Ninety per cent of the sea bed has still to be explored," said Patrick Lahey, president of Triton Submarines of Vero Beach, Florida, one of the leading companies involved in building such submersibles. "There is a host of wonders down there. You could cruise down to the wrecks of the Titanic or the Bismarck. You will be able to access any place in the ocean and watch all those wonderful sea creatures."

Ready by: Pilot project should begin 2012

Star attraction: Your own little kingdom