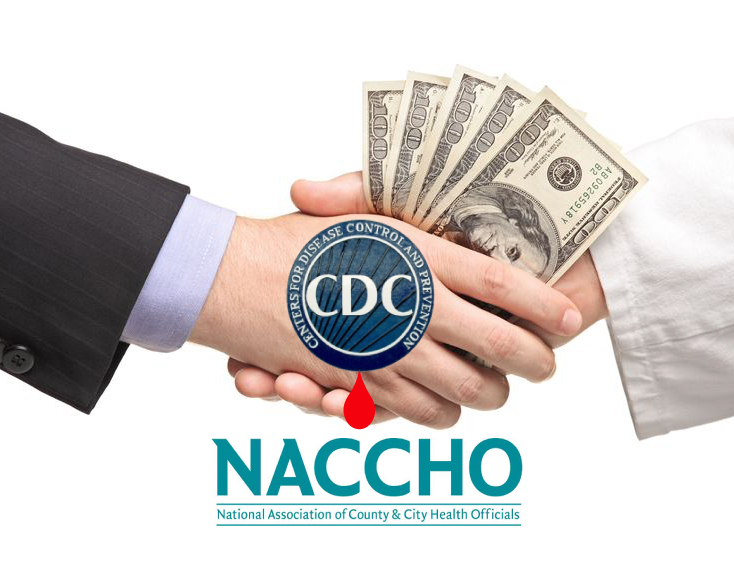 Originally published under the title "What's NACCHO got to do with Oregon's vaccine exemption fight?"

NACCHO? It sounds like a bad acronym from an Austin Powers movie. But it is actually one of the most powerful anti-vaccine choice front groups in the country, whose primary funder appears to be the CDC.

It sounds like a bad acronym from an Austin Powers movie. What if we told you that the answer to the question asked in the title of this article was "everything"?

What/who the heck is NACCHO?

NACCHO is The National Association of County and City Health Officials. If you briefly perused their website, you might be confused into thinking that they were a federal agency of sorts. First off, there's the name. Many people associate "National Association" with something sort of official. The next thing that might throw you off is the way NACCHO describes themselves:

NACCHO's members are the 2700 local health departments across the United States. NACCHO's vision is health, equity, and security for all people in their communities through public health policies and services. NACCHO's mission is to be a leader, partner, catalyst, and voice for local health departments in order to ensure the conditions that promote health and equity, combat disease, and improve the quality and length of all lives.

For the uninitiated, reading NACCHO's self-description might cause you to reach the following conclusions:

As you're probably getting used to by now with these articles, NACCHO could not be farther from any of that in reality, so let's look at the details:

1. NACCHO's "membership" revenue numbers don't add up at all 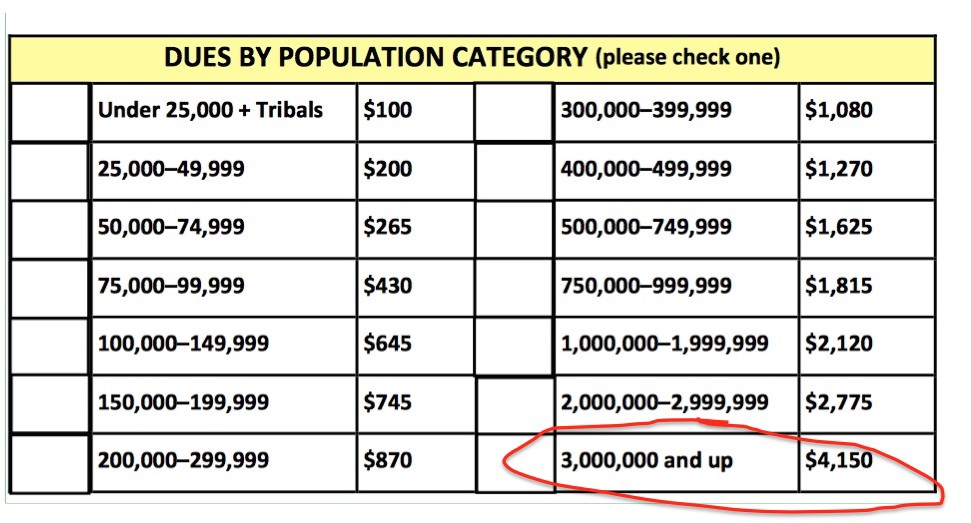 Just for fun, we ran the math. 2,700 local health departments. To be conservative, let's say EVERY health department had 3 million or more people in it (which would be impossible because with more than 2,700 health departments as NACCHO members that would mean the U.S. had 8.1 billion people) but let's just see how much money NACCHO could pull in annually from membership dues if that were true:

Here's the problem. NACCHO breaks out their revenue from membership dues on their 990 form. Are you ready for this? Here's what NACCHO actually made in membership revenues in 2013:

If you are saying, at this point, "so what"? You're right. We haven't proven anything. In fact, the only thing you know about NACCHO so far is that:

Here's the problem NACCHO makes $25 MILLION a year in revenues: 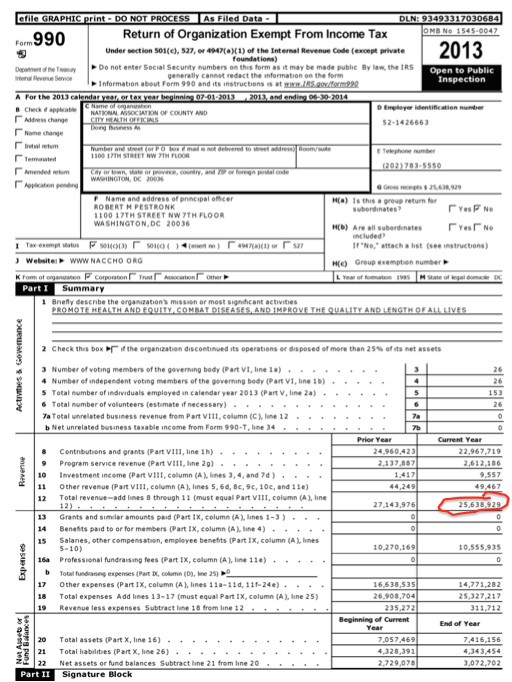 $25 million a year? That means membership dues—which NACCHO implies defines who they are—are responsible for approximately 2% of their annual revenues.

2. NACCHO makes all their money from government and private grants

With membership dues of roughly $500,000 and revenues of $25 million, the story on NACCHO is $24.5 million short of an explanation. Luckily, their 990 has to break out sources of revenue one step further, which is how we learn the following: 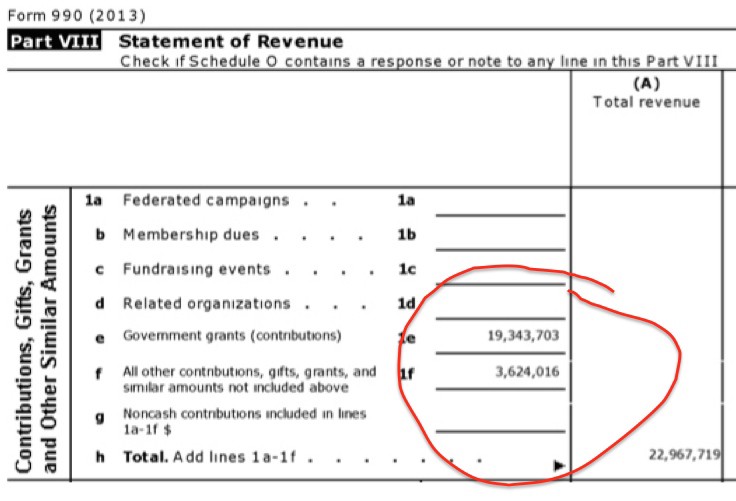 NACCHO is making the majority of their annual revenue from two sources: government grants ($19.3 million) and other grants ($3.6 million).

"NACCHO's mission is to be a leader, partner, catalyst, and voice for local health departments"

Unfortunately, NACCHO's Form 990 doesn't break out exactly where their Government grants come from, but this document gives you a pretty good idea: 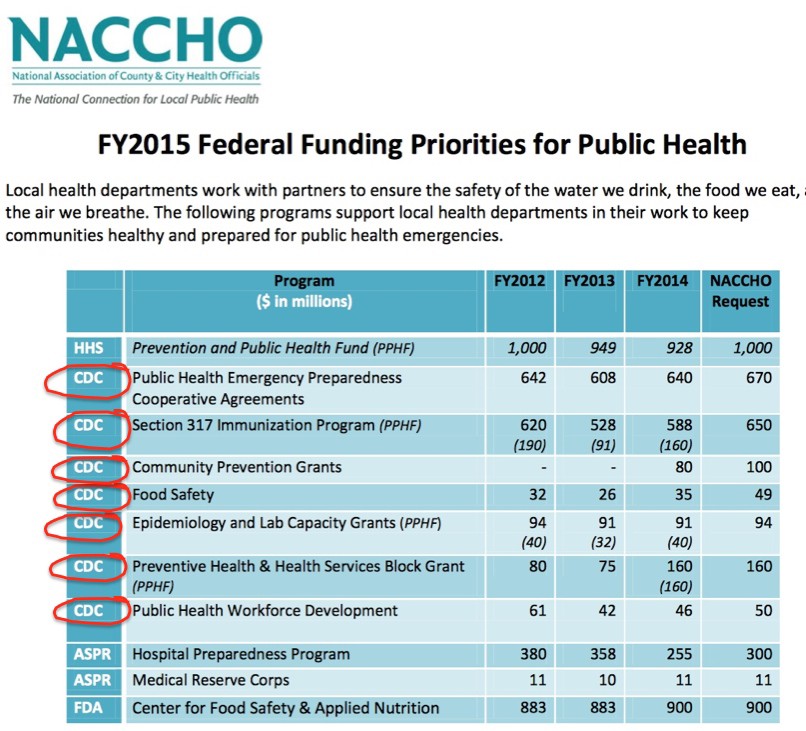 Wait a minute. 7 of the 11 funding priorities from NACCHO come from the Centers for Disease Control? Not only that, but CDC is really all over NACCHO's website, like here, here, and here.

NACCHO spells out who their partners (funders) are on their website right here. CDC is listed. So is the Immunization Action Coalition. And, a myriad of other "private nonprofts" that focus on public health. 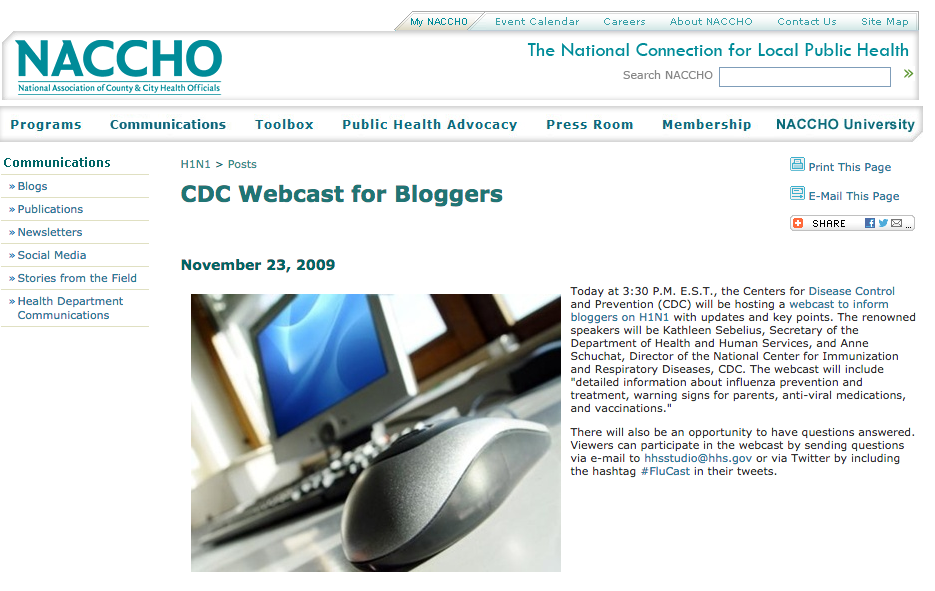 Can we draw any conclusions from this information? Sure we can:

NACCHO gets most of their money from government grants. CDC appears to be a primary funding source. 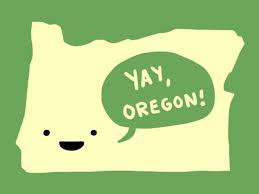 What does any of this have to do with Oregon? As the readers of this series know, Oregon is currently experiencing an intense fight over Senate Bill 442, a bill sponsored by State Senator Elizabeth Steiner Hayward that would remove both philosophical and religious exemptions from Oregon, effectively making vaccinations in Oregon mandatory for a parent who wants to send their child to any kind of school.

NACCHO and the Oregon Legislature

This article was spurred by repeated reports from members of the Oregon Legislature that they were being heavily lobbied by a group called NACCHO about Senate Bill 442. In general, NACCHO was characterized as a primary advocate of Senate Bill 442. This would make sense, since in July 2011 NACCHO issued a very clear policy statement that the time had come for states to eliminate personal belief exemptions:

the National Association of County and City Health Officials (NACCHO) urges that personal belief exemptions be removed from state immunization laws and regulations.

This isn't the first policy statement from NACCHO. A quick compilation of statements shows where the nonprofit group who get all their money from government grants is focused: 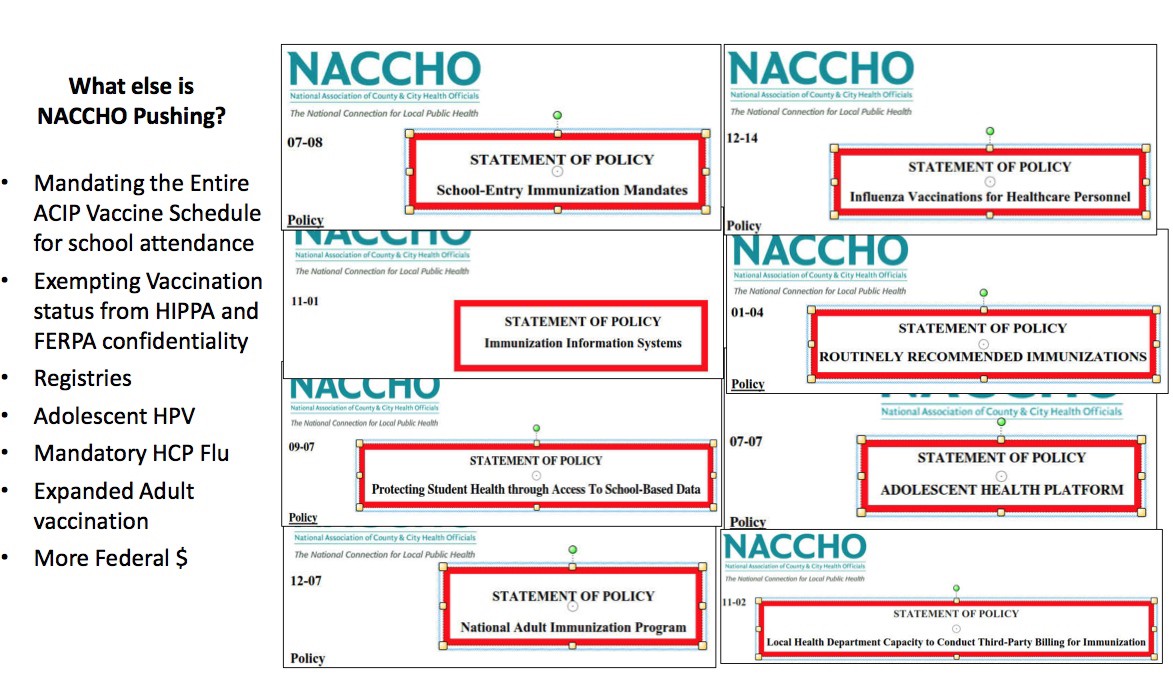 But, perhaps NACCHO's future goals should be of most concern to Oregonians. In July 2013, NACCHO's Board approved this new policy statement, titled "An Immunization Program for all Stages of Life": 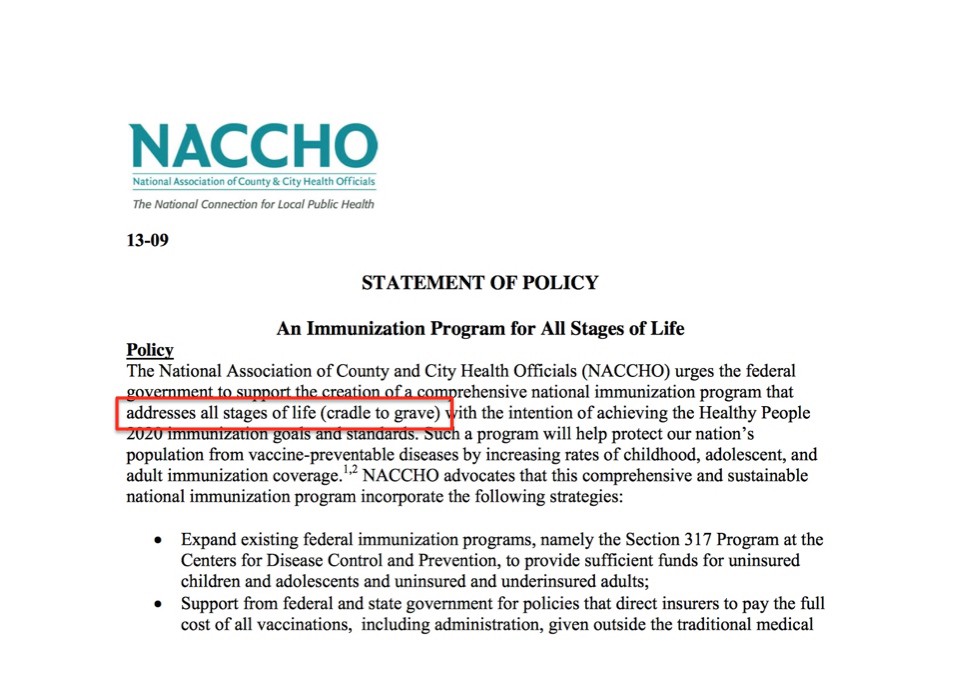 The National Association of County and City Health Officials (NACCHO) urges the federal government to support the creation of a comprehensive national immunization program that addresses all stages of life (cradle to grave) with the intention of achieving the Healthy People 2020 immunization goals and standards. Such a program will help protect our nation's population from vaccine-preventable diseases by increasing rates of childhood, adolescent, and adult immunization coverage.

Yes, that's what NACCHO said. They go on to write:

A function of many state and local health departments is to collect vaccination data and maintain immunization registries. These registries are often used to help ensure children and adolescents have up-to-date immunizations. Low levels of vaccine coverage among adults underscores the need to expand these systems to include adults and for providers to develop systems to minimize missed opportunities.

Oregonians, it's time to wake up. Let's put SB442 in proper context: its just another step in the plan of comprehensive mandatory immunizations for everyone, including ADULTS.

"Cradle to grave," as NACCHO says.

Is it really that hard to imagine what their policy statement for adult vaccinations will say in a few years?

If you support SB442, you also need to support getting up to date on your adult vaccines—the CDC recommends 72 vaccinations between the ages of 19 and 65. Are you going to get your 72 shots?

Is NACCHO breaking the law?

We're not attorneys, but we are very troubled by this document which we found on NACCHO's website that deals with prohibitions of lobbying on the part of organizations that receive grants from the CDC, like NACCHO. The language is pretty unambiguous:

So, what have we learned?

If you support Senate Bill 442, you are supporting a path to mandatory adult vaccinations, plain and simple, and the hand of the CDC in all of this is very hard to miss.

Who's behind Oregon Senate Bill 442? We think the answer is fairly obvious.

This article was written by several well-meaning Oregonians who are big fans of medical freedom and informed consent who apparently have nothing better to do than crunch numbers. We have nothing to gain or lose financially from the passage of this bill. We have proudly joined a movement of a few thousand Oregonains fighting this legislation, the organizing website can be found here: www.NoOnSB442.com. We have actually written four articles on this topic, in chronological order they include:

Part 2: Who cried wolf in Oregon

Part 3: What's NACCHO got to do with Oregon's vaccine exemption fight?

No on SB-442 is grassroots coalition of parents, family members, physicians, educators, thought-leaders, medical experts, concerned individuals, and Oregonians from all walks of life and all corners of the state who believe parents have a fundamental right to make informed medical decisions for their children—decisions free from unnecessary and overreaching mandates that compromise our religious and philosophical liberties.

Disclaimer: This article is not intended to provide medical advice, diagnosis or treatment. Views expressed here do not necessarily reflect those of GreenMedInfo or its staff.

Internal Site Commenting is limited to users that have a Friend or Professional Membership.
Disqus commenting is available to everyone.