US Healthcare: Most Expensive and Worst Performing 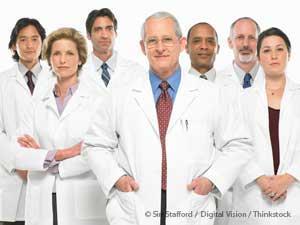 American health care is the most expensive in the world, with 17.7 percent of gross domestic product (GDP) spent on healthcare. This is significantly more than other developed countries. Australia, for comparison, which spends the least, spends only 8.9 percent.

For the costs involved, you might assume Americans enjoy the best health care in the world, but this would be a mistaken assumption. According to a new report released by the Commonwealth Fund, the US ranks last or near-last in all aspects of health care, from access and equity to efficiency.1

How Does the US Health Care System Compare Internationally?

Compared to the 11 other nations studied in the Commonwealth Fund report, the US ranks last. Despite spending significantly more, the US underperforms relative to other countries "on most dimensions of performance," according to the report. Countries that beat out the US in terms of health care quality (and affordability) include:

Perhaps most glaring, per capita health expenditures in the US were more than $8,500 in 2011… more than double the $3,405 per capita spent in the UK, which ranked first in the report.

As you can see in the Commonwealth Fund chart below, the US scored best on effective care (with a ranking of 3), but that failed to make up for its other dismal results, especially in the realm of preventive care. The Atlantic reported:2

The U.S. fared poorly, meanwhile, when it came to managing administrative hassles for both doctors and patients, avoiding emergency room use, and reducing duplicative medical testing, all part of the score for 'efficient care.'" 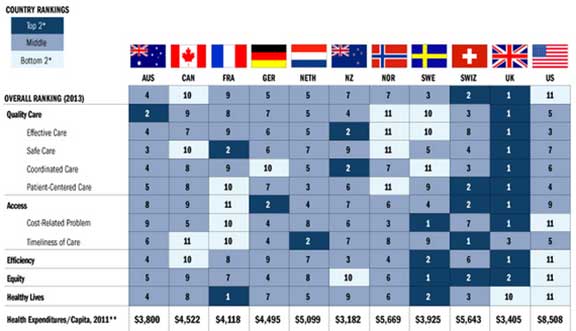 Key Findings About US Health Care: Worst Among Developed Nations

The report mirrors findings from years prior, which also found US health care lagging behind other nations. The Commonwealth Fund noted:

"The claim that the United States has 'the best health care system in the world' is clearly not true. To reduce cost and improve outcomes, the U.S. must adopt and adapt lessons from effective health care systems both at home and around the world."

Key findings from the report show that Americans are receiving little actual value despite their substantial investment in health care:3

Why Are US Health Care Costs So High?

It's a complex issue but one that can really be summed up in one word: greed. From drug companies to hospital billing, costs are out of control and reflect little of the actual value of the procedure or care received. Last year, the New York Times released an investigation on the costs of a simple intravenous bag of sterile saltwater, often used in emergency medicine.4 The average cost to manufacture this medical staple?

About 44 cents to $1 per bag, yet some US patients' were being charged 100 to 200 times that amount by hospitals, and that didn't include the separate charges for IV administration. Other patients were simply charged for an ambiguous "IV therapy" at nearly 1,000 times the cost of the solution. The New York Times reported:5

"At every step from manufacturer to patient, there are confidential deals among the major players, including drug companies, purchasing organizations and distributors, and insurers. These deals so obscure prices and profits that even participants cannot say what the simplest component of care actually costs, let alone what it should cost… And that leaves taxpayers and patients alike with an inflated bottom line and little or no way to challenge it."

Consider this: if the US health care system was a country, it would be the 6th largest economy on the entire planet!6 Much of this is due to waste. A review of US healthcare expenses by the Institutes of Medicine (IOM) revealed that 30 cents of every dollar spent on medical care is wasted, adding up to $750 billion annually.7 For perspective, the defense budget proposed by the Pentagon for 2014 was just under $527 billion.8 The IOM report identifies six major areas of medical waste:

Four Disturbing Reasons for the Exorbitant Cost of US Health Care

The documentary film The True Cost of Health Care by Dr. David Belk, MD (featured above) also reveals a number of shocking details that help explain the exorbitant cost of American health care.9 For example:

The US Medical System Could Very Well Kill You

This was followed by a 2003 article aptly titled "Death by Medicine", authored in two parts by Carolyn Dean, MD, ND, which described in excruciating detail how the modern conventional American medical system has bumbled its way into becoming the leading cause of death and injury in the US, claiming the lives of nearly 784,000 people annually!

These iatrogenic deaths (meaning deaths resulting from the activity of physicians) include everything from adverse drug reactions to medical errors, to hospital-acquired infections and surgeries gone bad—including 37,000 deaths from unnecessary medical procedures alone.

The authors took statistics straight from the most respected medical and scientific journals and investigative reports by the IOM, showing that on the whole, American medicine often causes more harm than good. In 2010, two additional reports published in New England Journal of Medicine11 and the Journal of General Internal Medicine12 respectively, showed just how little things have changed since 2003. For example:

The Solution? Take Control of Your Health in 8 Simple Steps

The more you take responsibility for your own health – in the form of nurturing your body to prevent disease – the less you need to rely on the "disease care" that passes for health care in the US. In the majority of cases, you'll likely find that you can prevent or resolve common health conditions by following these basic tenets of optimal health:

Not only will you be able to take control of your own health by participating, you'll also become part of one of the most profound public health projects of the 21st Century. As a participant, you agree to test your vitamin D levels twice a year during a five-year program, and share your health status to demonstrate the public health impact of this nutrient. There is a $65 fee each 6 months for your sponsorship of the project, which includes a test kit to be used at home, and electronic reports on your ongoing progress. You will get a follow up email every six months reminding you "it's time for your next test and health survey." 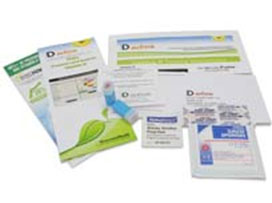 If you have any kind of sleep problem, whether you're having trouble falling asleep or staying asleep, my article "33 Secrets to a Good Night's Sleep" is packed with great tips to help you finally get some good rest. For even more inspiration and guidance on how to avoid falling victim to conventional health care in the US, check out the following eight "forgotten wisdoms" your grandparents adhered to that could quite literally save your life:

Tags: Expensive, Healthcare:, Most, Performing, US, Worst, and