Why Afternoon May Be the Best Time to Exercise 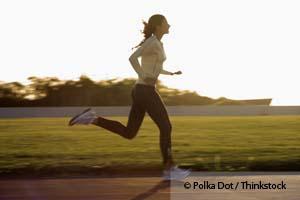 Do you often feel sluggish when the clock rolls around to 1:00 or 2:00 in the afternoon? A psychiatry professor at the University of California, Los Angeles’s Brain Research Institute may have an explanation about why many people hit “the wall” shortly after lunch hour.

Circadian rhythms, or circadian cycles, affect nearly every living organism, including plants, bacteria, insects and human beings. Circadian rhythms, largely based on signals of light and darkness, are your body’s internal clock sending signals to all of your cells directing how and when to conduct certain physiological processes.

The reason newborns wake up in the middle of the night isn’t because they aren’t yet “trained” to their parent’s schedule — it’s because their internal clocks haven’t yet developed1.

Your sleep and wake cycles are governed by this internal clock, which acts like a “choreographer” so that all your body’s systems can work together smoothly. How does it do this? By altering genetic expression, which controls the protein messengers your body sends to your heart, brain, liver and other vital organs. These proteins are vital to internal communication and coordination — and for staying healthy.

The featured study, appearing in the December 2012 Journal of Physiology2, found that exercise helps regulate your circadian rhythms, and the effect may be most profound if it’s done in the middle of the day.

If you have trouble sleeping at night or staying awake during the day, your internal clock may be broken. This is a growing problem in today’s world of ever-present electronic devices, globalization, and around-the-clock media. Your circadian rhythms may become confused, for example, by sleeping in a lit room when your body expects darkness, or by working the night shift. Or by jet lag, which is a common temporary disruption. Aging appears to worsen people’s internal clocks, according to Dr. Colwell3:

The problem is, research shows there are potentially serious health consequences of disrupted circadian rhythms, such as increased risk of diabetes, obesity, hypertension, memory loss, headaches, indigestion, mood disorders, learning problems, and even certain types of cancer. Disrupted sleep cycles have the potential to stimulate cancer growth by altering the hormones your brain makes while you sleep, such as melatonin. Melatonin is known to suppress tumor development. For help getting a good night’s sleep, refer to our comprehensive sleep guide. Lack of sleep and altered circadian cycles can exacerbate other serious diseases such as:

Decreased melatonin can even accelerate the aging process of your brain. For more about the importance of melatonin and how to optimize your melatonin production, please watch the following video.

Your Circadian Clock Switches Genes On and Off

Scientists at the Salk Institute have actually determined the specific genetic switches that synchronize liver activity to your circadian cycle, which sheds some light on how a damaged internal clock predisposes you to health problems.

The headquarters for your circadian clock is located in your brain, in a structure called the suprachiasmatic nucleus4, a tiny area sitting just above your optic nerves. However, there are other clocks in your body, including in your visceral organs, which tell specific genes when to make certain proteins. The switching on and off of genes is regulated by your “epigenome,” a set of molecules that signal to your genes how to direct your body’s physiological processes.

According to research scientists Satchidananda Panda of the Salk Institute, your liver’s clock regulates genes that control the timing of your metabolism of fat, glucose and cholesterol. You can’t control what genes you’re born with, but you CAN help control their expression, and exercise is one of the ways you can stack the deck in your favor.

"We know that when we eat determines when a particular gene turns on or off; for example, if we eat only at nighttime, a gene that should be turned on during the day will turn on at night. In response to natural cycles, our body has evolved to make glucose at nighttime. But if on top of what you eat, you're creating excess glucose and that damages organs, which leads to diabetes. It's like over-charging a car battery. Bad things will happen."

Since a broken internal clock can wreak havoc on your health, researchers became interested in how one might repair it. Exercise seemed a viable possibility.

They designed a study comparing the circadian rhythm effects of exercising at various times of day, using two groups of mice: one healthy group, and one group with biologically induced circadian disruptions. He found that all of the mice showed positive benefits from exercising, regardless of what time of day they exercised (for mice, exercising meant running on a wheel). But the benefits were much higher for the mice whose internal clocks were impaired in the first place.

For those discombobulated mice, after several weeks of running, their internal clocks were much more robust, particularly among the mice that exercised in the afternoon. This finding was a real surprise to researchers who expected to see the highest benefit from morning exercise, which tends to be favored by athletes. Mice exercising in the late evening showed the least benefit, some developing even more circadian disruptions, including poor sleep (which was not a surprise).

Exercising in the Morning Versus Afternoon: Good Arguments on Both Sides

It is interesting that this study favors afternoon exercise over morning exercise, at least when it comes to circadian rhythms. There is a good deal of evidence to the contrary — that exercising first thing in the morning is preferable in several ways. Many, including me, prefer exercising in the morning for a couple of reasons. First, it gets the task done early in the day, before time pressures invariably tend to interfere with your best intentions.

Secondly, there is strong evidence that exercising in a fasting state, which is easiest to do before breakfast, offers the highest metabolic benefits. A 2010 study in the Journal of Physiology5 showed that exercising in a fasting state improved insulin sensitivity, which has great implications for weight loss/fat loss and prevention of type 2 diabetes. The metabolic benefits of exercising are, of course, some of the strongest motivators for getting people to the gym.

Could it be that exercise has different types of benefits, depending on the time of day it’s performed?

From a circadian point of view, it makes sense to see higher benefits from afternoon exercise. Circadian rhythms control your body temperature, which has an impact on your workout. Your body temperature tends to be a degree or two warmer in the afternoon than in the morning, resulting in better muscle performance and decreased risk of injury. You are also generally more alert in the afternoon. Plus, if you tend to hit that wall around 1:00 or 2:00pm, going to the gym might be a good way to get over it.

However, on the other hand, the argument Ori Hofmekler makes strongly favors pre-breakfast workouts. Ori is a fitness expert and author of several books, including The Warrior Diet. He is a huge proponent of the combination of calorie restriction with exercise as the best way to optimize our health.

In a nutshell, Ori explains that your body has a preservative mechanism that protects your active muscle from wasting itself. So, if you exercise without fuel in your system (i.e., before breakfast), you’ll tend to break down tissues other than your active muscle, which is what you want. In other words, your body spares the active muscle during exertion.

Instead, your body burns up the worn out tissues for fuel. It digests and recycles damaged proteins, tumors, sick cells, etc., into the amino acid building blocks for new and stronger muscle tissue. Not only is the timing of your exercise important, but what you eat after exercise is also important if you want to maximize your benefits. For more about this, please listen to my interview with Ori.

The Bottom Line... Listen to Your Body to Decide

Even though there are discrepancies in the scientific literature about the best time of day to work out, most experts will agree that the best time for YOU to exercise is when you will do it consistently! One thing is certain: any exercise is better than none, regardless of when you do it.

If you enjoy exercising in the morning and have successfully organized your schedule around it, then don’t change it. The most important thing is to choose a time of day you can stick with, so that exercise becomes a habit. I would generally discourage exercising in the evening, IF you have an alternative, especially if you struggle with your sleep. Exercise raises your heart rate and body temperature, which are not conducive to sleeping.

The researcher of the featured study, Dr. Colwell, admits it’s too early to conclude that afternoon exercise is more beneficial to circadian rhythms in humans, since his study involved mice. But it’s possible afternoon sessions may produce stronger benefits for your internal clock.

It seems to me that, until new research answers the remaining unanswered questions, you can do some experimentation on your own. Perhaps try a month of exercising in the morning, followed by a month of exercising in the afternoon, as your schedule allows. Maybe you can exercise on your lunch hour — you might even convince a couple of friends to join you. Then see how you feel, and let your body be your guide.

Tags: afternoon, be, best, exercise, may, the, time, to, why