Wisconsin has Grown Into a Hotbed of Organic Farming

History, geography both played a part in making the state No. 1 in the nation for organic dairy farms. 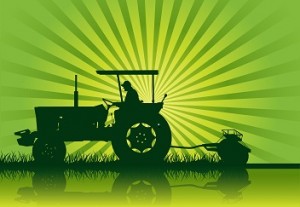 TAYLOR, Wis. — The pink had disappeared from the darkening sky, but the barn on this dairy farm radiated a warm light. Inside, the brothers worked in silence — wiping, tugging and readying the udders.

They milk these cows each day, twice a day. But it’s a ritual Jim and Alan Ideker don’t take for granted.

The brothers moved from Minnesota to this western edge of Jackson County five years ago to milk a mentor’s organic dairy herd. Since then, they’ve amassed 132 of their own Holstein cattle, fed from a patchwork of 450 acres they rent, till, pasture and harvest.

“If we were going to work hard, we wanted to work hard for ourselves,” said Alan Ideker, 24, pulling on the brim of his baseball cap.

The Idekers have relied upon organic neighbors for advice and, on occasion, a rotary hoe. They’re not hard to find here. Thanks to its hilly terrain and long history of organic institutions, including the now-international Organic Valley, based in little La Farge, southwest Wisconsin has become the organic farming capital of the Midwest and, by some measures, the country.

The state claims the second-highest number of organic farms, after only California, according to the U.S. Department of Agriculture. In 2008, the most recent year available, it was No. 1 in organic dairy farms.

“I joke that I’m a blue-sky salesman, telling people how organics are great, you should go organic,” said George Siemon, chief executive officer of Organic Valley. “That’s one thing, but when their neighbor does it — and it works — it’s a whole other conversation.”

The state’s organic past is part hills, part happenstance.

Organic farms are clustered in the state’s southwest, census maps show, particularly the Driftless Region, an area that escaped being flattened by glaciers. Those dramatic hills make the land “less conducive to conventional farming” and row crops, said Erin Silva, associate director of the Center for Integrated Agricultural Systems at the University of Wisconsin.

The region “has a history of small farms and grazing, which are cornerstones of organic practices,” she said.

Each small city seems to have an organic operation bigger than its population might suggest. Viroqua, population 4,362, sustains the expanding Viroqua Food Co-op, which had $5.5 million in sales in 2011, and the Midwest Organic Services Association, a nonprofit that certifies more than 550 organic dairies across the country.

Spring Valley, pop. 1,352, is home to the Midwest Organic and Sustainable Education Service, which draws thousands to its annual conferences. In Westby, pop. 2,200, the century-old Westby Cooperative Creamery started offering organic options in 2011.

Then there’s Organic Valley, the world’s largest organic cooperative, which has grown up in La Farge, pop. 746.

“There was no magic to La Farge,” Siemon said. Just an old creamery for sale. Soon, the cooperative was renting out “every little hole in the wall in town here,” he said Now, its headquarters — with modern, angular wings anchored by a red, barn-shaped center — sits on a hill above town, flanked by solar panels.

The farmer-owned cooperative started in 1988 with 57 farmers. By 2012, it counted more than 1,800 farmers in 35 states and three Canadian provinces. Southwest Wisconsin accounts for 324 of those.

From the beginning, Organic Valley’s mission has been about more than organics, Siemon said over salad and bread pudding in the headquarters cafeteria. “It was also about how to make family farms viable.”

Today that mission is even more urgent. With high land and feed prices, “the family farms of the Midwest are having to decide whether to get bigger, go organic or quit,” Siemon said. “It’s that crystal clear now.”

Organic food sales swelled 10.2 percent in 2012 — the first double-digit growth since 2008, according to the Organic Trade Association. Meanwhile, conventional food sales rose 3.7 percent. Organics are still a small slice of the total food market, making up just 4.3 percent. But that’s grown from 2.5 percent in 2005.

A four-day-old calf, so new that he hadn’t yet earned a nickname, poked his nose through the red fence separating him from his neighbor, a smaller, female calf tagged No. 110.

The Ideker brothers decided to raise dairy cows organically only because of the higher, more stable price their milk would fetch. But now, it’s also about these calves.

As a home-schooled teenager, Jim Ideker worked on his great uncle’s beef farm. Then with 60 dairy cows on a neighbor’s farm. After that, with 120 beef cattle and 120 dairy. All were raised conventionally. The brothers had no interest in organic, which restricts hormones and antibiotics and requires at least 120 days on pasture. Organic cows also produce less milk.

They equated the word “organic” with “voodoo.”

“We wanted nothing to do with it,” Jim Ideker said as Alan nodded. “We’d talk about it like it was a farce.”

Then they took a Farm Beginnings course with the Minnesota-based Land Stewardship Project and met Paul Olson, who owned an organic dairy farm near Taylor, Wis., and needed help while he worked as board chairman of the National Farmers Organization.

Now, the Idekers are believers. Very few of their calves die, Jim said. Their mothers, too, are healthier, able to get pregnant more often. All that helps with their bottom line.

“Our vet is here a third of the time they’ve been on a conventional farm,” he said. “You don’t need all the drugs once you do it right to begin with.”

While some organic farmers have struggled in recent years to find and pay for grain that’s grown without pesticides, the Idekers have harvested their own.

Wisconsin farmers are more likely to grow organic field crops, including barley and hay, to feed their livestock, according to a 2012 report by the Center for Integrated Agricultural Systems.

“Homegrown feed grains and forages help make Wisconsin’s organic dairy farms more profitable than their counterparts in other parts of the U.S., where most of those inputs are purchased,” the report says.

Up a sloping, curved road and atop a hill sits the Wedeberg farm, an Organic Valley sign beside the driveway.

Jake Wedeberg, 28, and his older brother John are the fifth generation to farm this land. Their father, Jim Wedeberg, is one of the seven organic farmers that founded CROPP Cooperative, the co-op behind the Organic Valley brand, and now works as its dairy pool director. So it’s largely up to the brothers to till, bail, haul and milk.

Jake studied engineering at the University of Wisconsin, Platteville — paying for tuition partly by growing butternut squash — and then worked at the Organic Valley offices. But he missed the farm. So about a year ago, he returned full-time.

“It’s great to be self-employed, to work on your own projects,” he said. He knows he’s lucky to have grown up on a farm, now 310 acres. “That’s a huge capital expense we don’t have to worry about.”

Partly because start-up and overhead costs for dairy are high, advocates say future growth in organics will depend on older farmers handing off their operations to the next generation, whether it be their children, such as the Wedebergs, or folks looking to join in, like the Idekers.

After midday chores at the farm, the Ideker brothers drove their blue Buick through Taylor to an old white farmhouse they’re renting. “The mansion,” they joke.

In a wood-paneled office, Jim Ideker grabs a thick folder labeled “Farm Building Papers.” Inside: blueprints for a new free stall parlor to go up in spring that will allow them to double their herd. They smile whenever they mention the plans.

“Once we get that facility, we’ll have the right conditions,” Jim Ideker said, plus “the feed quality, the land base and the cow genetics to perform.”