An Open Letter to President-Elect Trump 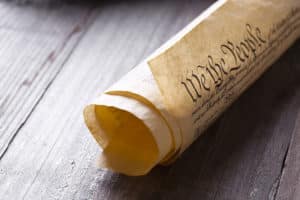 Our only concern is the Constitution.

As the old saying goes, “the proof is in the pudding.” What matters to us is what happens starting January 20, 2017.

Getting rid of Obamacare is a good thing. Replacing it with some other federal program, or keeping parts of it, is not.

A hiring freeze on federal agencies is a good thing. Forever keeping the status quo on the remaining ones is not.

Making sure there are no new federal gun control programs is a good thing. Failing to even start working to end the current ones – like those from 1934 to 1968 – is not.

Following the 4th Amendment is a good thing. Allowing the NSA, FBI, DEA, and other federal agencies to continue their mass warrantless surveillance programs is not.

With a nearly endless litany of federal acts, rules, orders and regulations already on the books, this is not even scratching the surface. But, it forms the basis of our view.

The powers not delegated to the United States by the Constitution, nor prohibited by it to the States, are reserved to the States respectively, or to the people.

Modern presidents have rarely even paid lip service to the Tenth Amendment. So even though there were no specifics, it was good to see your transition website include it:

He will defend Americans’ fundamental rights to free speech, religious liberty, keeping and bearing arms, and all other rights guaranteed to them in the Bill of Rights and other constitutional provisions.  This includes the Tenth Amendment guarantee that many areas of governance are left to the people and the States, and are not the role of the federal government to fulfill.

Your predecessor waged an even greater war on the 10th Amendment than his predecessor did. There are 28 states with varying degrees of marijuana legalization, seven of which have legalized for the general public. This is a state decision and, at very least, federal resources should never be used to interfere with how those people decided.

Using unconstitutional federal grant programs to coerce states into enforcing or effectuating federal programs and goals has been the norm for far too long. Whether it’s grant programs to get states to spy on people, or a “stimulus” to strong-arm states into Common Corestandards, it all needs to stop. This includes the federal “equitable sharing” program that helps local law enforcement ignore state restrictions on asset forfeiture.

No one in their right mind should expect you (or any single person) to turn around 100+ years of unconstitutional federal government programs on your own.  Apparently, however, some of your supporters believe you to have some superhuman ability to do so, telling us to “wait” or “hold off” on any or every effort in the states to block federal programs.

But rejecting the founders’ advice is something we cannot do.

For just one of many possible examples, Thomas Jefferson put it this way:

“Where powers are assumed which have not been delegated, a nullification of the act is the rightful remedy: that every State has a natural right in cases not within the compact, (casus non foederis,) to nullify of their own authority all assumptions of power by others within their limits”

On January 20, 2017 – like on January 19 – there will be thousands of federal criminal statutes, and as many as 300,000 federal regulations with criminal enforcement provisions on the books.

A vast majority of those are powers which have been assumed, but “have not been delegated.”

So, following James Madison’s advice in Federalist #46, we will continue to do what we’ve been doing for years under both the Bush and Obama administrations. That is, work with states to pass laws banning support for various federal programs.

Even with establishment federal politicians wanting them to continue, it will be much easier to end these programs if dozens of states are already opting out. Like with 28 states defying D.C. on marijuana, the path to the Constitution becomes more likely when the states push the issue forward.

That leads me to my final point.

With so many unconstitutional programs already on the books, and no way possible to end them all in one fell swoop, you’re likely to see us opposing the federal government far more often then we’re supporting it.

For us, it’s not about a party or person. It’s about the Constitution.

Michael Boldin [send him email] is the founder of the Tenth Amendment Center.He was raised in Milwaukee, WI, and currently resides in Los Angeles, CA.Follow him on twitter - @michaelboldin, on LinkedIn, and on Facebook.
http://tenthamendmentcenter.com/2016/11/14/an-open-letter-to-presid...