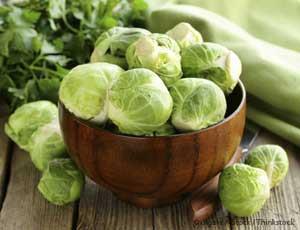 If you’re looking for an extremely nutrient-dense food that’s also tasty and easy to prepare, look no further than Brussels sprouts.

This member of the cruciferous family of vegetables (along with broccoli, cauliflower, cabbage, kale, and more) was cultivated in Italy during the reign of Roman emperors and was named for the city of Brussels, Belgium, where it was first referenced in the 1200s.

Plus, Brussels sprouts are a good source of fiber, manganese, potassium, choline, and B vitamins. They even contain protein. What is perhaps most exciting about Brussels sprouts, however, isn’t only their incredible array of nutrients. It’s their antioxidants and other phytochemicals, which have been proven to fight chronic diseases, including cancer.

Brussels sprouts contain sulfur-containing compounds called glucosinolates, which your body uses to make isothiocyanates, which activate cancer-fighting enzyme systems in your body. As reported in the journal Carcinogenesis:1

“Glucosinolates are sulfur-containing glycosides found in the Brassica vegetables. Their breakdown products include isothiocyanates, which are produced following exposure to the endogenous plant enzyme myrosinase. Isothiocyanates are pungent, biologically active compounds that suppress carcinogenesis in vivo, and induce apoptosis in vitro.”

Indole-3-carbinol, for example, is one glucosinolate breakdown product that halts the cell cycle in breast cancer cells without actually killing the cells.2 The cell cycle is a rigidly controlled series of steps a cell must go through before it can divide in two, involving the duplication of the cell's contents and a final split.

If you can alter specific components of the cell cycle, you can stop the growth of cancer cells without killing normal cells. Indole-3-carbinol interferes with the cell cycle in a way that turns off a gene for an enzyme important in the cell's growth cycle.

Brussels sprouts have been linked to the prevention of a number of cancers, including colon cancer,3 ovarian cancer,4 and others. One study even found that compounds in Brussels sprouts may trigger pre-cancerous cells to commit suicide, which suggests adding more of this superfood to your diet could be a powerful anti-cancer strategy.5

In fact, in one study, men who ate about 1.5 cups of Brussels sprouts daily for five weeks had a 28 percent decrease in DNA damage, which the researchers concluded showed “that consumption of cruciferous vegetables [Brussels sprouts] may result in a decreased cancer risk.”6

While all of the cruciferous veggies are known for their cancer-fighting powers, Brussels sprouts have been shown to contain even greater amounts of glucosinolates than cabbage, kale, cauliflower, and broccoli.7

What else are Brussels sprouts good for? One of the reasons why Brussels sprouts are so useful for preventing chronic disease is due to its role in your body’s detoxification system. As reported by the George Maateljan Foundation:8

“The detox support provided by Brussels sprouts is both complicated and extensive. First, there is evidence from human studies that enzyme systems in our cells required for detoxification of cancer-causing substances can be activated by compounds made from glucosinolates found in Brussels sprouts.

Finally, there is evidence that the DNA in our cells is protected by naturally occurring substances in Brussels sprouts, and since many environmental toxins can trigger unwanted change in our DNA, Brussels sprouts can help prevent these toxin-triggered DNA changes.”

What makes eating whole foods like Brussels sprouts even better is that many of the beneficial compounds have multiple uses in your body, and they work synergistically together. Those glucosinolates that help fight cancer and aid in detoxification, for instance? They also offer potent anti-inflammatory properties in your body.

When many people think of antioxidant-rich foods, Brussels sprouts probably donot come to mind… but they should. Not only do Brussels sprouts contain well-known antioxidants like vitamin C, but also others that are much less known – but equally as important, like kaempferol, isorhamnetin, caffeic and ferulic acids, and the relatively rare sulfur-containing compound called D3T (3H-1,2-dithiole-3-thione).

This means that, when you eat Brussels sprouts, you’re helping your body to ward off chronic oxidative stress, which is a major risk factor for many types of cancer and other chronic diseases.

At the same time, Brussels sprouts’ anti-inflammatory compounds will quell chronic inflammation in your body, another risk factor for chronic disease. Remember the indole-3-carbinol (I3C) that I mentioned in regard to breast cancer? I3C is also anti-inflammatory and it operates on a genetic level, helping to prevent inflammatory responses at the very early, initial stages of disease development.9

It’s due to Brussels sprouts’ anti-inflammatory properties that they may also offer benefit for heart problems, including heart attack and atherosclerosis. As the George Maateljan Foundation noted:10

“Of particular interest here has been the isothiocyanate (ITC) sulforaphane, which is made from glucoraphanin (a glucosinolate) found in Brussels sprouts. Not only does this ITC trigger anti-inflammatory activity in our cardiovascular system — it may also be able to help prevent and even possibly help reverse blood vessel damage.”

How to Best Prepare (and Enjoy!) Brussels Sprouts

Adding Brussels sprouts to your regular meal rotation is a good idea, and a tasty one at that because they’re so versatile. You can steam Brussels sprouts and toss them with olive oil, Parmesan cheese, or butter. You can roast them and quarter them, then toss them like a salad with onions, feta cheese, and balsamic vinegar. You can even keep a bowl in the fridge, seasoned with salt and pepper, to snack on throughout the day – their small bite-sized package makes them perfect for popping in your mouth.

Do be careful to avoid overcooking them, which can not only damage some of their nutrients but also alter their taste. If your Brussels sprouts become overly “smelly,” mushy or turn a muted green, they’re probably overcooked. Ideally, they should be bright green with a slightly crisp texture and pleasant, nutty/sweet flavor, even after they’re cooked.

If you want to learn even more about what's in the food you're eating, visit our Food Facts library. Most people are not aware of the wealth of nutrients available in healthful foods, particularly organic fruits and vegetables. By getting to know your food, you can make informed decisions about how to eat healthier and thereby boost your brain function, lower your risk of chronic disease, lose weight, and much more.

Food Facts is a directory of the most highly recommended health foods to add to your wholesome diet. Its purpose is to provide you with valuable information about various types of foods including recipes to help you maximize these benefits. You'll learn about nutrition facts, scientific studies, and even interesting trivia about each food in the Food Facts library. Remember, knowing what's in your food is the first step to choosing and preparing nutritious meals each and every day. So visit Mercola Food Factstoday to get started.