Did Russia Destroy a Secret US Moon Base? 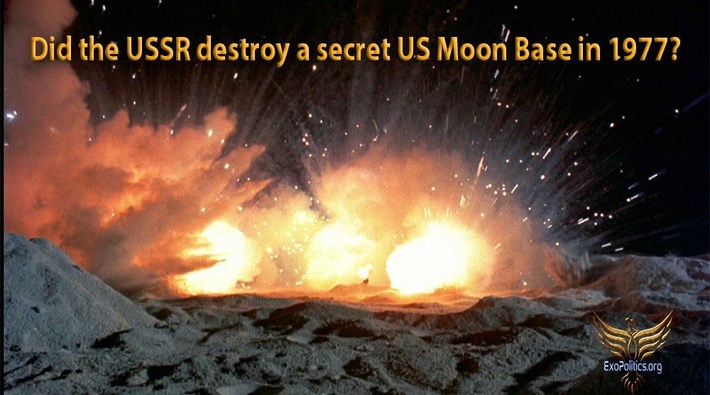 Found a very interesting article on Exopolitics.org about the recent Wikileaks release of a document referencing the destruction of a secret US moon base by Russia!  Here's some of the article snippets of interest from the article.

"A Wikileaks document that referred to the destruction of a US moon base sometime in the 1970s has recently gained renewed attention. The document is dated January 24, 1979, and is titled “Report that UR Destroyed Secret US Base on Moon.” It was correspondence involving one or more officials from the U.S. State Department to Samuel L. Devine, a Republican member of the US Congress.

The document has tags “Operations–General | UR – Soviet Union (USSR)” which reveals that “UR” stands for the USSR. The document was marked unclassified, which suggests that the content of the correspondence did not contain classified information, and involved open source material widely available at the time. The fact that officials were discussing such a topic raises the question, did the USSR destroy a secret US moon base sometime before January 1979?"

"However, to explore the question of whether or not the USSR destroyed a secret Moon base in the 1970’s we need to go back a few years to the remarkable audio letters of Dr. Peter Beter. Beter was the General Counsel of the Export-Import Bank (1961-67) and had high-level sources who confided to him what was happening behind the scenes in space from the 1960s to the early 1980s. In this modern era of whistleblowers, it’s worth emphasizing that Beter was the first genuine insider to come forward with details about secret space programs. "

"In his 1977 newsletter, Beter wrote about the information he had received from his sources about the US moon base:

I was first alerted to the existence of a secret base on the moon last November 1976–but it has been one of the best kept of all Rockefeller secrets, and it was only a few weeks ago that I was able to confirm its existence and learn the complete story; and since that time, events have moved with lightning speed.

Beter went on to give details about the deadly race to develop particle beam weapons as it played out in 1977:

Throughout this year an unseen but deadly race has been underway to see who would get an operational Particle Beam first: the Rockefellers, at their secret moon base; or the Soviet Union, in earth orbit. By late spring, a Salyut manned space craft was launched that carried out preliminary tests of beam-weapon techniques, using lasers in order to simulate the Particle Beam.

By the 26th of September, American personnel at the secret Rockefeller moon base nestled in Copernicus Crater were almost ready. Their Particle Beam was almost operational–but they were too late. By late that day, the Soviet Union began bombarding the moon base with a Neutron Particle Beam. Through the night, and all day on September 27 the moon base was bombarded without mercy with neutron radiation just like that produced by a neutron bomb; and by that evening as Americans looked up at the peaceful full moon overhead known as the Harvest Moon, the last few Americans on the moon were dying of neutron radiation. America had lost the Battle of the Harvest Moon."

I had never heard of this Dr. Peter Beter before but began listening to some of his recordings from the 1970s.   He was putting out massive truth about the New World Order run by the Rockefellers long before anybody else I was aware of!   He was the first person who ever talked about secret space programs and exposed our fake news big time!  Of course his timing on things was off because he thought we would be in a nuclear war with Russia long ago but he was also right about many things such as the elites from the United States being the ones who created the Bolshevic Revolution that killed over 20 million Christians in Russia.  You won't hear any of this from our mainstream news sources even today!    He clearly knew a lot about what was going on and had some real sources I'm sure.  He was very well spoken and knowledgable on many topics of the day.  Was he right about Russia destroying a secret US Moon Base?  I don't know but as a young adult I always knew something didn't seem right about us going to the Moon in 1969 but stopping in the early 70s and never going back!  It doesn't make any sense but this is the lie they still feed us!  It's outrageous!

Listen to Dr. Peter Beter's tape from September 30th, 1977.   This guy was a radical truth teller and  a true patriot I would have liked to have known about when I was only 13 years old.  One thing he talks about is Diego Garcia being used in the secret space program after they shut down the Apollo space program and told the public the HUGE lie it was because they "ran out of money!"

The good stuff about Diego Garcia starts about the 20 minute mark in the video below.  We have recently had several whistleblowers who claim they routinely bring antigravity starships down from orbit to load and unload cargo at Diego Garcia!  These whistleblowers say it's the perfect place to do this because everybody at the base is not allowed out of their quarters at night nor can they wander around the island so they bring stuff down at 3 in the morning.   You'll hear what he says about the Moon Base and how it was destroyed right after he talks about Diego Garcia at the 20 minute mark!   This video only has 700 views so nobody knows about this information that's for sure!  This guy Beter was way ahead of his time and trying his best to wake up the sheep!

Here's more good information on the base at Diego Garcia in the video below.  You never hear too much about this Diego Garcia base except when the US is going to be bombing a country back into the stone age.  Then the Fake News tells you the B2's and B-52s will be launching from there.  Clearly Diego Garcia is the perfect place to operate a secret space program just as Beter suggests here in 1977!  You can't see anything going on there because it's in the middle of the Indian ocean.  The US and the UK stole the entire island and moved every living soul out of there!   They've never done that before with any other base so it's a very secret operation for sure!