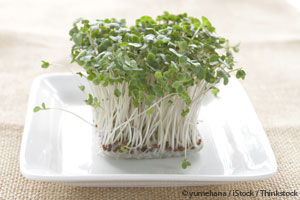 A diet of mostly whole, organically-grown foods is undoubtedly among the most effective ways to prevent disease and achieve optimal health, and sprouts may offer some of the highest levels of nutrition.

From my perspective, broccoli, watercress, and sunflower sprouts are foods that virtually everyone can and would benefit from growing. Adding these to your diet can go a long way toward improving your nutritional status—and it won't cost you much to grow them.

The Many Health Benefits of Broccoli Sprouts

Science has proven time and again that Mother Nature is the best physician, and food is the best medicine.

Broccoli, for example—and to an even greater degree, sprouted broccoli seeds—has been linked to a rather impressive list of health benefits. Research has shown broccoli has the capacity to prevent a number of health issues, including but not limited to:

Some of the latest research10, 11, 12 into this "super food" suggests that broccoli sprouts may help detox toxic pollutants. As reported by Time Magazine:13

"Broccoli sprouts specifically are a source of glucoraphanin, which creates sulforaphane when chewed or swallowed. That compound accelerates the body's ability to detoxify from various pollutants..."

The three-month long study included about 300 Chinese men and women living in one of the most polluted areas of China, a rural community in the Jiangsu Province.

The test group drank half a cup a day of a beverage consisting of sterilized water, pineapple, and lime juice, with dissolved freeze-dried broccoli sprout powder. The control group drank the same mixture without the addition of the sprouts.

After urine and blood tests were collected and analyzed, the researchers found that the test group, who received the broccoli sprout powder, excreted far greater levels of two carcinogens. Excretion of benzene increased 61 percent, and the rate of excretion of acrolein increased by 23 percent.

Benzene is usually found in car exhaust fumes, but can also be ingested via soda, where it can form from benzoate salt—used as a preservative. Acrolein forms from the breakdown of certain indoor air pollutants, from the burning of organic matter such as tobacco, and the burning of fuels like gasoline. Study author Tom Kensler told Time Magazine:14

"The situation is that people throughout China are breathing dirty air, and the exposure is largely unavoidable. We wanted to boost the defense mechanism that accelerates the rate that these are cleared form the body so there is less opportunity for harm to be evoked by chemicals."

When asked if people living in other large cities like New York or Los Angeles could benefit from drinking the same mixture, Kensler says he thinks their approach could be extended across all people."

Broccoli sprouts are also an excellent alternative if you don't like the taste or smell of broccoli. Best of all, you can easily and inexpensively grow broccoli sprouts at home. Another major benefit is that you don't have to cook them. They are eaten raw, usually as an addition to salad or juice.

As noted in the featured study, the compound called glucoraphanin appears to have a protective effect against toxic pollutants by improving your body's ability to eliminate or excrete them. Glucoraphanin has also been shown to protect against cancer. Other health-promoting compounds found in cruciferous vegetables such as broccoli sprouts (and mature broccoli) include:

It's also important for regulating gene expression, and this compound has been found to play a role in activating more than 200 different genes.

One 2008 study21 found that just four extra servings (equating to about 10 spears) of broccoli per week could protect men from prostate cancer, largely because of the anti-cancer activity of this compound.

Watercress Sprouts—Another 'Superfood' to Add to Your Daily Diet

Although broccoli sprouts contain the highest amounts of isothiocyanates, other cruciferous vegetables also contain this anti-cancer compound, including watercress. This often-overlooked, leafy green is a close cousin to mustard greens, cabbage, and arugula.

When phytochemicals like sulforaphane are excluded from the equation, watercress may actually be the most nutrient-dense vegetable out there—scoring higher on nutrient density scores than both broccoli and sunflower sprouts.

Based on 17 nutrients, including potassium, fiber, protein, calcium, iron, thiamin, riboflavin, niacin, folate, zinc, and vitamins A, B6, B12, C, D, E, and K, watercress scored a perfect 100 in a recent study titled, "Defining Powerhouse Fruits and Vegetables: A Nutrient Density Approach."22, 23

One of the best culinary aspects of watercress is its versatility. It can be used as a salad green in salad or vegetable juice, or you can steam and eat it as a vegetable. You can also add it to soups or on top of sandwiches for a subtle, peppery flavor.

Growing Your Own Sprouts Is Easy and Inexpensive

Sprouts are far less expensive (90 percent or greater) if made at home rather than purchased, so I strongly recommend growing your own sprouts. It's easy and can radically improve your overall nutrition. Just consider this: sprouts can contain up to 30 times the nutrients of organic vegetables! They also allow your body to extract more of the vitamins, minerals, amino acids, and essential fats from the rest of your diet.

Add to that the boon of requiring very little space, and the ability to grow them indoors, year-round. I'm working on a comprehensive guide to sprout-growing, but in the meantime, you can find instructions on rawfoods-livingfoods.com.24

I started out growing sprouts in Ball jars about 15 years ago, but I've found that growing them in potting soil is a far better option. With Ball jars, you need to rinse them several times a day to prevent mold growth and it is a hassle to have them draining in the sink, taking up space. Trays also take up less space. When grown in soil, you can harvest your sprouts in about a week. I strongly recommend using organic seeds, and a pound of seeds will probably make over 10 pounds of sprouts.

As mentioned, you can use sprouts in salad, either in addition to or in lieu of salad greens, or add them to vegetable juice or smoothies. When it comes to which sprouts to grow, taste preference may ultimately guide your selection, but I'd encourage you to consider growing some of the most nutritious varieties, which include:

Sprouts are an authentic super food that many overlook or have long stopped using. In addition to their superior nutritional profile, sprouts are really easy to grow if you're an apartment dweller, as they don't require an outdoor garden. During sprouting, minerals, such as calcium and magnesium, bind to protein, making them more bioavailable. Furthermore, both the quality of the protein and the fiber content of beans, nuts, seeds, and grains improves when sprouted. The content of vitamins and essential fatty acids also increase dramatically during the sprouting process.

Watercress, sunflower seed, and pea sprouts tend to top the list of all the seeds that you can sprout and are typically each about 30 times more nutritious than organic vegetables. As discussed above, many sprouts also contain compounds with anti-cancer and detoxifying properties. Speaking in general terms, sprouts also have the following beneficial attributes:

Fermented veggies are another outstanding super food that can help your body eliminate toxic pollutants such as pesticides. But whatever method you choose; juiced, whole, sprouted, cooked, or fermented, do make it a point to eat your veggies. This is one food group that is incredibly diverse, so there's a wide variety to choose from and plenty to suit virtually everyone's tastes.