Senior Aide to Senator Murdered 30 days after giving this interview! 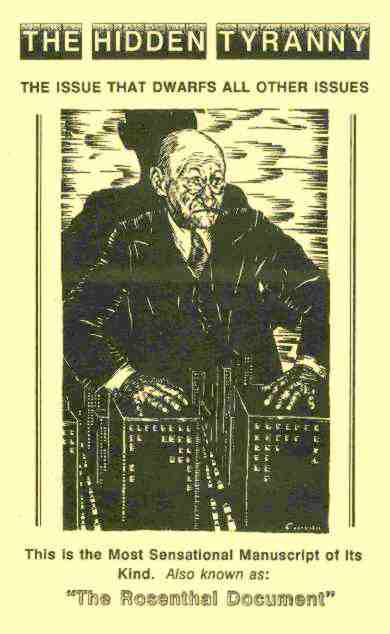 Harold Wallace Rosenthal was murdered thirty days after this interview, which at that time was the senior aide to Senator Jacob K. Javits in an alleged sky-jacking attempt on an Israeli airliner in Istanbul, Turkey, August 12, 1976. blamed on the Palestine Liberation Organization in Istanbul, Turkey. Mr. Walter White JR, a concerned patriot and the editor of the Conservative monthly Western Front conducted the 1976 interview.

“It would appear that Mr. Rosenthal might have "talked too freely" because although four people were killed and some 30 injured during the sky-jacking attempt, Rosenthal was not killed by a random bullet as were the others.”

In the interview, Harold Wallace Rosenthal states that, "Most Jews do not like to admit it, but our god is Lucifer...and we are his chosen people. Lucifer is very much alive."

“I didn't understand that this satanic cult is hidden within Judaism.  Judaism is a satanic cult (Cabala, Talmud) masquerading as a religion (Torah, Old Testament.) I had nothing to do with "Jewish teachings." I was secular. But secularism is Judaism: Materialism, and the denial of God.”

“The Rabbi Finkelstein interview is often cited as proof of the Jewish Conspiracy, but some consider it a hoax because of a ridiculous claim that Jews grind goy children into hamburgers. It is a hoax, but not one by Patriots as you might imagine. It's a Jewish hoax to discredit genuine revelations like The Protocols of Zion and The Hidden Tyranny.”

“The new law also would establish the Talmud, the core work of Jewish law, as an official basis for Israeli state law.”  – Benjamin Netanyahu

"I want to anchor in this law, that it will be a Basic Law that the state of Israel arose and exists on the basis of the Torah and the Jewish tradition," Netanyahu explained, promising to define the Hebrew calendar as the official state calendar.” – Benjamin Netanyahu

“The Talmud, first and foremost, blasphemes the Lord Jesus Christ, calling Him a ‘magician who is now in Hell boiling in his own excrement.’”

“The Talmud also blasphemes Christ’s holy mother, the Virgin Mary, calling her a ‘hairdresser, a prostitute, who had sex with carpenters.’”

“Then The Talmud spews its venom on the Gentiles to be treated less than sub-humans, defrauded, cheated, and even murdered as civilians in times of war, though they be innocent women, and children.” – Brother Nathanael

Satanic Versions of the Jewish Talmud

“The English translation of the Talmud has been watered down so as to conceal from the Gentiles the “satanic verses” contained in the original Hebrew.

The “Satanic Verses” of the Talmud can be classified into 3 categories:

2) Hatred Towards The “Goys” (Gentiles).

3) Blasphemies Against Jesus Christ, The Virgin Mary, & All Christians.”

“You belong to your father, the devil, and you want to carry out your father's desires. He was a murderer from the beginning, not holding to the truth, for there is no truth in him. When he lies, he speaks his native language, for he is a liar and the father of lies.”

The latest craziness from last year of May 2015 is when Rabbi Michael Laitman states that Jews are not of this world, but from somewhere else. Jews do not know where they are from consciously, but unconsciously they do. And that the Jews are far advanced on the path of evil and have come to planet Earth to take control of humanity!

“I will make those who are of the synagogue of Satan, who claim to be Jews though they are not, but are liars--I will make them come and fall down at your feet and acknowledge that I have loved you.”

"Protocols of Zion" is the NWO Blueprint

“The Protocols clearly was not intended to become public. It was obtained by an agent of the Tsarist secret police in Paris and published in Russia in 1901. After the Bolshevik Revolution slaughtered the Tsar and his family in 1918, the Protocols was banned on pain of death.

It has been excoriated as an anti-Semitic forgery. This is a red herring designed to divert attention from its real and startling significance. It describes a long-term "strategic plan" for the subversion of mankind.”

Is the New World Order “Jewish”? 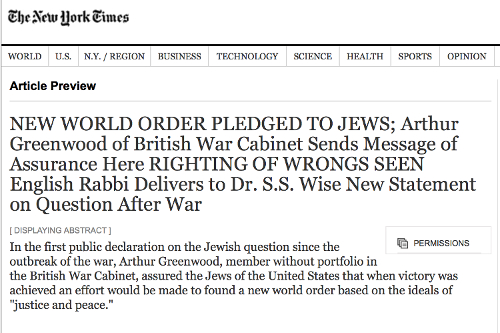 The Protocols of the Learned Elders of Zion

How the Jews treat Christians in Israel!

“In a book by Prof. Gershom Scholem published 27 years after Jewish scholar's death, Scholem maintains that the Star of David was not an ancient Jewish symbol but rather a magical emblem that was only adopted by Jews in the 19th century”