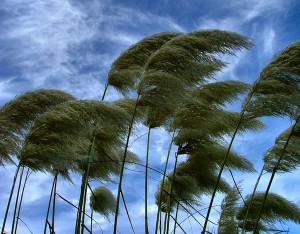 Note: Please join www.project.nsearch.com so you are kept informed of all new free energy devices that are being developed and share our content!  Thank you!

“Every home in America can run on wind energy. In fact these units can be installed on existing power poles in rural areas, to catch the wind and send its energy back to the plant.”
- Raymond Green, Inventor

In 1913, Inventor Nikola Tesla patented a bladeless steam turbine that he claimed was the most efficient and the most simple rotary engine ever designed.  Due to a lack of high-quality materials, Tesla was never able to properly build his engine.

One century later, we now have all the materials needed to build Tesla’s turbine, and in 2010, a patent was issued to a company called Solar Aero for a wind turbine based on the Tesla design.  Their turbine will be presented in this article along with other bladeless turbines like it that will allow us to revolutionize energy production for the entire world.

Current wind turbine technology with rotating blades is both inefficient, and causes noise pollution, which has been reported to have detrimental health effects on residents living nearby.  They have also proven to be a major hazard for wildlife such as birds and bats, killing nearly 600,000 birds a year.  The bladeless turbine prototypes presented below have solved all of these problems – with few moving parts, and no noise during operation. 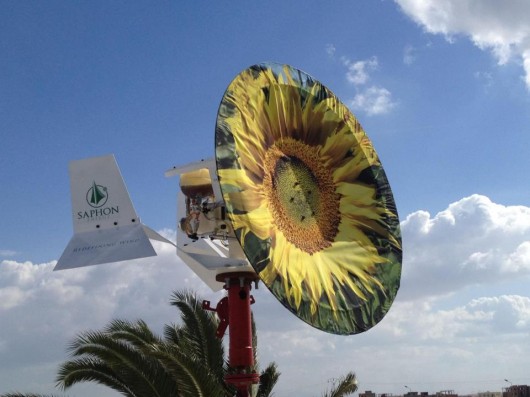 According to Saphon Energy, the Saphonian is undoubtedly more efficient than bladed turbines and its Performance Coefficient (Cp) is way beyond Betz Limit (59.3%). The Saphonian efficiency level stands at the outstanding level of around 80% and therefore, its generated power increases exponentially with the wind speed.

With a design inspired by a ship’s sails, Saphon Energy has created the Saphonian – a bladeless wind turbine at double the efficiency, and half the cost, of a regular wind turbine.

With the patented “Zero-Blade Technology”, used by the Saphonian turbine, the wind drives pistons which are then converted into mechanical energy.  Hydraulic pressure is then produced and converted into electricity using a hydraulic motor and generator.

A law in physics called Betz’s law, published in 1919 by German physicist Albert Betz, calculates the maximum power that can be extracted from the wind by a wind turbine, independent of its design.  Incredibly, Saphon Energy claims that the efficiency of their Saphonian turbine exceeds the Betz limit.    With a claim like that, this is certainly an intriguing technology, but only time will tell.  The company is now looking for manufacturing partners, and is hoping to bring their technology to the market by 2014.

The designers are currently testing the device’s capabilities, but are trying to gather funding for a larger model that could produce more power.

Mecanoo, a team of Dutch architects, have developed a wind energy generator with no moving parts called the EWICON (Electrostatic Wind Energy Converter). The EWICON undergoes little wear and tear and requires almost no maintenance.  Perhaps its most important design feature is that it makes no noise and casts no moving shadows, two of the principal complaints that deter wind turbine installation in the United States. 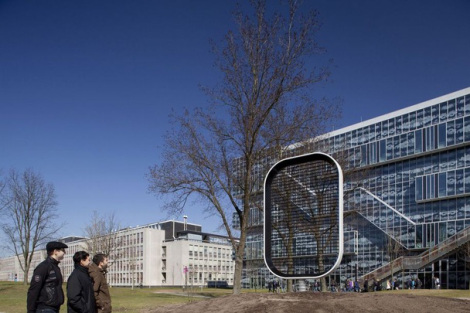 The Fuller Wind Turbine, developed in New Hampshire, USA by Solar Aero, has only one rotating part – the turbine-driveshaft.  In 2010, Solar Aero received a patent for this turbine, which is based on the Tesla design.  Like other bladeless turbines, the entire assembly is contained inside a housing, and so all danger to wildlife is eliminated.  Their website is not longer up, so the status of this turbine remains uncertain. 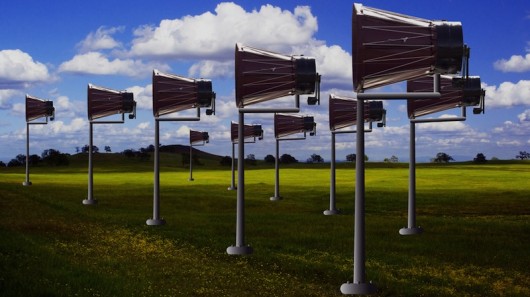 World War II veteran Raymond Green has created a bladeless wind turbine which is bird and bat-friendly, and very quiet in operation. Green intends to produce his design in various sizes, from personal size turbines to large turbines for use on wind-farms.

Green’s patented “Inner Compression Cone Technology” draws in wind through its wide entrance, forcing it into the smaller space where the turbine blades are located. Green claims that his ‘Catching Wind Power’turbine can generate double the energy output of a typical turbine, even when placed closer to the ground than normal.

Green has teamed up with a company named Sigma Design Company, with hopes to bring this product to the market by 2014. 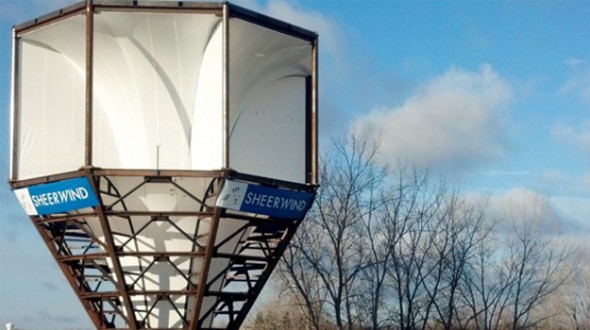 The company says it can produce wind power at a cost of $750 per kilowatt, installation included.

Perhaps the most efficient wind turbine ever developed, SheerWind claims their Invelox system is up to 600% more efficient than traditional wind turbines.  The Invelox can generate power from gentle winds moving as slow as 1 to 2 MPH.

Invelox can generate power from winds as gentle as 1-2 MPH. It works by capturing passing wind in large scoops and funneling it down through an increasingly narrow space, where its velocity is multiplied.  The compressed air is then used to power a small turbine generator.

We now have 6 prototypes for a more efficient method of harvesting wind that we can use to free ourselves from the current dependence on unsustainable energy producers.  Inexpensive, sustainable energy means freedom for humanity, so as these technologies make their way onto the market, we will feel a weight lifted from our shoulders from the decrease in money needed to survive.  May the most efficient wind-energy generator prevail!

I wanted to add the following products to this wonderful list of innovative wind turbines. 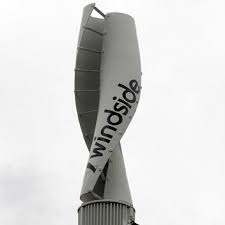 Specifically designed for long-life & reliability in all weather & wind conditions. 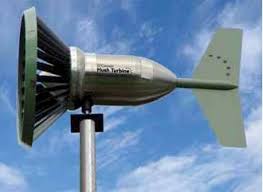