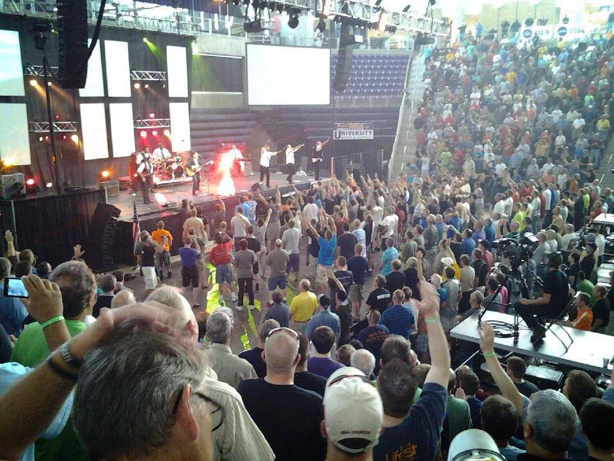 The Bible teaches, and Christians believe, that angels are present on earth, to protect people and join in worship of God, and the faithful know it although they may not be able to document it using some scientific test, mathematical formula or photograph.

A digital image captured during a time of praise and worship at his year’s Promise Keepers men’s conference in Cedar Falls, Iowa, shows what looks like an angel:

A radiant, glowing white figure standing on the stage while the worship and praise band, “One Body” leads the men in singing “Jesus, take all of me. I run to you, I run to you. I lay everything at your feet. Let my life be yours.”

On its Facebook page, the men’s group famed for its hundreds of conferences calling on men to return to God and be the faithful husbands, fathers, brothers and sons that the nation needs, described that “something supernatural took place in Cedar Falls.”

A man at the conference, using his iPad, took two pictures of the band, and both had “an angel on them.”

David Jesse is a spokesman for the international organization that plans a tour and broadcast event from Jerusalem on Sept. 17, 2014, featuring Messianic Rabbi Jonathan Cahn, author of the New York Times bestseller “The Harbinger,” now on DVD in the “The Isaiah 9:10 Judgment” documentary.

He said while the image is stunning, the back story makes it even more compelling.

“Heaven Is Beyond Your Wildest Expectations: Ten True Stories of Ex...

During the 2013 season, the Saturday morning message at PK conferences was on purity, he said.

“We candidly addressed the issue of pornography and adultery, as we are convinced that this issue has become the enemy’s ‘spiritual weapon of mass destruction,’” he said.

That day in Cedar Falls, there was a powerful message on that issue, and an altar call, where men “stood in front of the stage weeping and asking for forgiveness and healing from God.”

The band was leading with, “Jesus, take all of me. I run to you, I run to you. I lay everything at your feet. Let my life be yours.”

Up in the seats was “a Southern Baptist, self-described ‘conservative, non-prophetic’ pastor” who lifted his iPad over his head to take a photo.

“He looked down at the screen to see a strange glow on the stage that sent chills down his spine. He then showed the picture to the man standing next to him, and proceeded to take another picture of the stage. When he looked at the second picture and saw the same image, he was overwhelmed with emotion, as he was convinced that what he saw in these photos was an angel. He immediately came to stage right and showed the pictures to our program director,” he said.

And no, it’s not photoshopped. 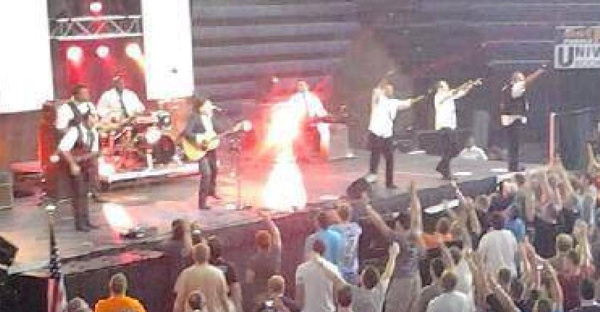 The pastor’s wife released a statement, “My husband took these photos. No photo shop. Enjoy debating angels and stage lights but don’t miss the miracle of a few thousand men gathering to praise God and to be challenged to be men of honor who keep their promises! At least 17 of them were our guys. That’s a miracle. They were in our church Sunday gathering at the front praying with their families and friends. Miracles happen.”

“There will always be those who are skeptical. Even God’s own voice was given a ‘natural explanation,’ but I was at this event (and all PK events this year), and what I experienced was a move of the Spirit unlike anything before. And we need this move – this awakening – to continue,” Jesse said.

Millions of men have come before the ministry of Promise Keepers since its founding by then-University of Colorado football coach Bill McCartney in 1990, whose team took a national championship title. He led a gathering, the “Stand in the Gap” event on the National Mall in Washington on Oct. 4, 1997, that drew an estimated 1.4 million, one of the largest events ever to be held there.

He’s in the College Football Hall of Fame class from 2014.

A central message of Promise Keepers is that men need to be warriors for their faith, family, marriages, churches, communities and nation.

“There is an all-out assault taking place on anyone who stands for biblical truth,” the organization explains. “Rarely a day goes by where we don’t hear of someone being criticized – or even outright attacked – for affirming the morals and values that only a few decades ago were the norm in society. The bombardment of sin is destroying families and communities – but men of God are rising up to fight!”

The 2014 conference theme is “Unleashing the Warrior,” and events tentatively are scheduled for May 16-17 in Jacksonville, Fla...

Those are in addition to the Israel tour offerings and Sept. 17 worldwide simulcast event that will originate in Jerusalem.